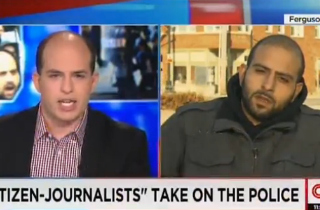 As tensions mount in Ferguson, Mo., before a grand jury decides whether to indict Officer Darren Wilson for the death of 18-year-old Michael Brown, local activists have begun fighting against large media companies they feel distort the truth. Reliable Sources host Brian Stelter confronted one such activist Sunday.

Bassem Masri infamously led protesters last month in shouting down CNN reporter Sarah Sidner as she attempted to deliver a report from Ferguson. When asked by Stelter why he did it, Masri responded that it was “nothing personal” against Sidner — who, he added, is a “great reporter” — but that local activists were rejecting the mainstream media.

“We’re not going to be just laying back and letting anybody paint whatever narrative they want when it comes to our community,” Masri said of the motivations behind protesting the media.

The activist, who has been continuously live-streaming Ferguson protests since the beginning, told Stelter that his main objection to the mainstream media is its insistence that the demonstrations have been violent. “We haven’t hurt a cop, we haven’t touched any of them,” Masri said. “We’ve haven’t made any aggression towards them, it’s been vice versa.”

Later in the segment, Stelter confronted Masri with footage of the live-streamer outwardly provoking a police officer, calling him a “pig,” and saying “I’m praying for your death.”

“Aren’t you just trying to provoke the police there, trying to get more views maybe?” the CNN asked.

Masri responded that he’s just a citizen and that he doesn’t truly mean what he said.