CNN Anchor to Bernie Surrogate: ‘Here’s Why We Say It’s Over… It’s The Math’
VIDEO

CNN Anchor to Bernie Surrogate: ‘Here’s Why We Say It’s Over… It’s The Math’ 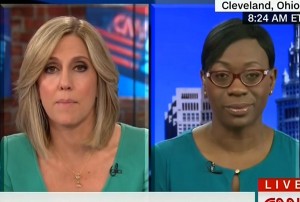 For weeks now, various political media figures have tried everything to get independent Vermont Senator and Democratic presidential candidate Bernie Sanders and his supporters to feel the fork that’s been stuck in their campaign by voters in the Democratic primary race. On Wednesday morning, however, it was a CNN news anchor who took a turn trying to describe the smell of the coffee to prominent Sanders surrogate and  former State Senator Nina Turner with a rather blunt declaration.

New Day anchor Alisyn Camerota tried to get Turner to weigh in on the plan for post-primary unity, but Turner insisted the race was not over:

Camerota is correct, of course, and so is Turner. Barring a major miracle, Bernie Sanders will end the primaries with fewer votes and fewer pledged delegates than Hillary Clinton, but he has said that even then, he’ll make the case to superdelegates that they should overturn the will of those voters based on general election polling.

You can like or dislike that argument, or even believe that it’s more a matter of leverage than an actual expectation of success, but at the end of the day, Turner is right. Like it or not, it really isn’t over until Bernie Sanders says it’s over.