‘Did You Ever Vote For Bill Clinton?’: Trump Dodges Tough Question in New THR Interview

‘Did You Ever Vote For Bill Clinton?’: Trump Dodges Tough Question in New THR Interview 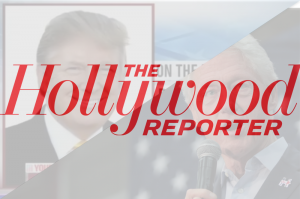 In a new cover story for The Hollywood Reporter, GOP presumptive nominee Donald Trump sat with Michael Wolff for an interview that revealed — among other things — that the man’s refrigerator in Beverly Hills, “…only contains water and about a dozen pints of ice cream.”

Given that it’s THR, the conversation unsurprisingly works it way to show business at one point, with the real estate mogul directly asking the writer, “I might do something with Ari [Emanuel]. Does he represent you?” But aside from many of the usual conversations you’d expect from cable news outlets, Wolff’s piece included one curious exchange regarding his relationship to the former Secretary of State Hillary Clinton and her husband, the former President.

For all of the criticizing and questionably below-the-belt attacks that Trump has launched at the Clintons, he stopped just short in confirming how he voted in past Presidential elections. Then just the Governor of Arkansas, Bill Clinton of the Democratic party spoiled George H.W. Bush‘s reelection campaign in ’92 and Ross Perot along with him, and the ’96 battle pinned Clinton against Republican Bob Dole. Regarding Trump’s voting record during this era, Wolff writes:

[Trump]’s punted on Hillary as a topic since we started our conversation, as though to talk about her was not to talk about him. If in public he needs to treat her as his cause, in private he doesn’t want her taking up his time. But I sneak it back.

“Did you ever vote for Bill?” I ask, thinking that both men have as much in common as they have that separates them.

Indeed. These two ’80s guys were undoubtedly once quite in sync.

This is a different tune of sorts to a January interview he gave with Fox News’ Bill O’Reilly, who pressed the candidate directly about voting for any such Democrat in the past few decades.

O’Reilly: Did you vote for any Democrats in the last 30 years for president?

Trump: It’s probable. I mean, I would always vote for the best person.

O’Reilly: Did you vote for Bill Clinton?

In the same interview, Trump confirmed that he voted for George W. Bush, “twice.” For those of you keeping score at home, that only leaves Barack Obama and Michael Dukakis in 1988 as one of the “probable” Democrats he pseudo/sheepishly admits to voting for in the past three decades, though O’Reilly didn’t press the matter, perhaps recognizing he was moments away from forcing Trump to admit that — gasp! — he’s actually a longtime Democratic party voter. But as his exchange with Wolff reveals in THR today, his vehement non-support for Bill Clinton in ’92 and/or ’96 seems strangely and suddenly dubitable.