CNN Panelist On ‘White Privilege’: We Have To Ask Why All Recent Mass Killings Committed By ‘White Guys’ 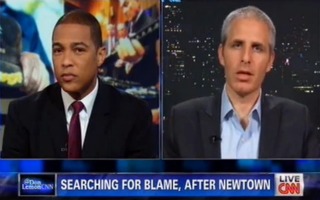 CNN panelist David Sirota and writer at Salon.com told Don Lemon Saturday that we need to “explore” the question of why so many recent mass killings were committed by white men. “I’m not saying we should racially profile white guys,” he said, but suggested that had the shooters been “Arabs” or “African-American men”, we’d be having a “very different conversation” in this country.

According to Sirota, many of the recent gun tragedies in America have been carried out by white men, 18- to 25-years-old. He asks,

“It’s an important question,” Sirota notes, “in light of a political climate” where a “white victimization” narrative is widespread. He continued,

Lemon referenced a recent article Sirota had written in which he said if the shooter was a black male, he’d be a labelled a “thug,” or if he was Muslim, he’d be labelled a “terrorist,” but since he’s white, no generalized labels have been thrown about. Sirota stood by his piece and said he hoped the “next time something bad happens,” we don’t “ascribe to entire groups the bad actions of individuals.” The reason we’re not now, he said, is because it’s a form of “white privilege.”