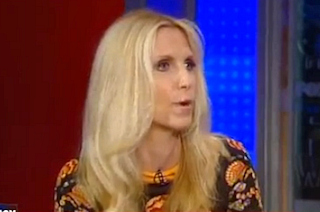 Ann Coulter appeared on Fox & Friends Sunday morning to follow up on her initial reaction to the Zimmerman verdict—”Hallelujah!“—in more detail. Coulter maintained that George Zimmerman was a sacrificial lamb for the media’s race-driven narrative, a narrative necessary to enable Barack Obama’s liberal agenda.

“This was a media-led mob, and an innocent man almost went to prison for thirty years because of well, Al Sharpton stirring up hatred and creating a narrative for which there was never any evidence and after this long trial there is still never any evidence,” Coulter said.

“This case never should have been brought. It was purely political for the media to continue their narrative of all of America as ‘Mississippi Burning.’ They want to keep us divided by race, ginned up by race, and it’s a relief that someone who was innocent did not have to be the sacrificial lamb for this media narrative about America as being run by the Klan.”

Tucker Carlson wondered about the lack of progress in race relations, despite the election of Obama.

“It’s been sixty years since the Civil Rights movement began, and yet you’d never know that in the press,” said Carlson. “But I thought the election of Barack Obama— even if I wasn’t for it—I thought at least we’re moving past this one stage in American history into something new and better in race relations. And it turns out: that’s not true, at all!”

“I think it ended right after the O.J. verdict,” Coulter said. “At that moment, when a mostly black jury—100% Democrat by the way—found a spectacularly guilty black celebrity not-guilty of murder, white America said, ‘That’s it we are shutting down the white guilt bank.’ And we had peace for a decade. And you’ll notice we didn’t have cases like this for about ten years after O.J….Obama brought it all back because the liberal media needs this ‘Mississippi Burning’ in order to promote the black president with his liberal policies, which is what they care about. But at least it wasn’t brought fully back, because George Zimmerman was found not guilty.”

Coulter finished by arguing that assuaging what she would call race baiters will never satisfy them: “Enough white people will think, if we just make a black man president, it will all go away. If we just allow this cop, or this person falsely accused of racism, they’ll be our sacrificial lambs, that’ll be the end of it. It’s never the end of it. You have to say, ‘No, this is not fair, this is not the truth.'”