Dan Rather: Force Behind OWS ‘Is a Woman Operating Out of Her Apartment in New York’ 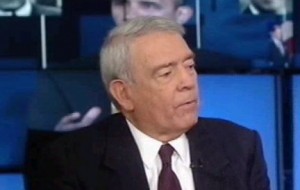 Dan Rather made a rather surprising statement on The Chris Matthews Show today when he said that one of the driving forces behind the Occupy Wall Street protests “is a woman operating out of her apartment in New York.”

Rather argued earlier on the show that the Occupy Wall Street protests were a “mirror image” of the Tea Party protests, or at least have the potential to be. Chris Matthews asked Rather to “tell me something I don’t know” about the movement, and Rather shared the story of this mysterious figure.

“The real moving force behind this, what’s happening in the Wall Street protesters and the efforts to spread it around the country, is a woman operating out of her apartment in New York. She’s brilliant with the internet. She goes under the nom de plume of Grim. And Grim is the real leader of this movement operating out of her apartment. She is internet savvy and whether it succeeds or fails she’s the key.”

First of all, it’s important to point out that “Grim” is not organizing the protests per se, but is merely one of the two creators of the “We Are The 99 Percent” meme you may have noticed spreading on the internet. However, according to NewsBusters, Rather’s more glaring omission was that “Grim” is, in real life, an independent media maven working alongside someone who works full-time for a small media organization. Priscilla Grim (her real name) and her anonymous friend Chris (a self-described anarchist) told Mother Jones why they were inspired by the Occupy Wall Street movement.

MJ: Why do you think it is connecting so strongly?

PG: Because we all have a story, and the conversation about social safety nets has been lessened to that of accounting and not of the day-to-day realities. It is one thing for me to tell people that I have not been to a dentist in five years; it is another to confess that I deal with frequent wisdom tooth pain with ill-gotten muscle relaxers and ice pops, and this has been my reality for at least two years.

C: I think they want to let others know that they’re out there, that they exist, that their problems exist. That they’re not just some statistic compiled in a spreadsheet, that they’re real human beings with real human challenges. That they won’t be an abstraction, a walking political cartoon for people to argue and debate over while nothing gets done in the end. They’re not just “indebted students,” “the uninsured,” “the foreclosed.” They’re THIS indebted student, they’re THIS uninsured person, they’re THIS person whose home was foreclosed. Specificity has great power.

Again, I’d like to emphasize that these two are NOT shadowy figures controlling the Occupy Wall Street movement; they created a Tumblr page. In fairness, Dan Rather probably has no idea what Tumblr is, but all these people are responsible for is starting a meme that has allowed people to share stories about their personal financial woes. Yes, one of them is an anarchist. Who cares? This would be like finding out the person who created the Hamsterdance was a Nazi and accusing anyone who’s ever made a Hamsterdance tribute video of being Nazi sympathizers. Once a meme gets out there, it’s beyond the control of the creators. People shape it however they want to while still keeping the core message intact.