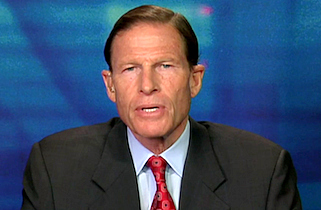 Senator Richard Blumenthal (D-CT) spoke to CBS’ Face the Nation Sunday morning and urged Congress to reconsider the gun control bills that were introduced after the Sandy Hook shooting but failed to pass the Senate, arguing that Congress would be “complicit” in future gun violence if it did not act.

“A year and half ago it seemed like we were on the verge of, potentially, legislation that would stop the madness and end the insanity that has killed too many young people, thousands, tens of thousands since Sandy Hook,” Blumenthal said. “I really, sincerely hope that this tragedy, this unimaginable, unpseakable tragedy, will bring back measures that would keep guns out of the hands of dangerous people who are severely troubled or deranged like this young man was, and provide resources. …90% of the American people want background checks to be heard, to be responded to, and to end the madness and insanity.”

“The legislation that failed to pass — it got support from fifty-five senators — would have provided a mental health initiative with more resources, greater ability for the Santa Barbara police to intervene, to use the sheriff’s word, to have professionals trained in diagnosing and detecting this kind of derangement,” Blumenthal continued. “Obviously not every kind of gun violence is going to be prevented by laws out of Washington but at least we can make a start.”