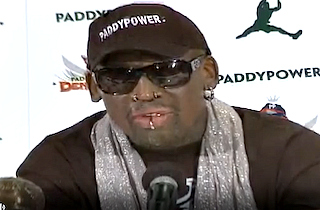 Following his visit to North Korea over the weekend, former NBA star Dennis Rodman announced that he would host an international basketball game in the isolated nation, and even train a North Korean team to compete in the Olympics, in addition to challenging President Barack Obama to open discussions with North Korean leader Kim Jong-Un.

“This is about trying to bridge a gap to a country that people say is so bad,” Rodman said. “This country’s not bad. The marshall now, he wants to change, and I’m there.”

The game, which will feature an American team competing against a Rodman-trained team, will be sponsored by Paddy Power, an Irish betting company, and will occur on Kim Jong-Un’s birthday. The Olympic announcement seemed to come as surprise to the Paddy Power MC.

Rodman, the only American to have contact with new leader, also claimed Jong-Un wanted to open a dialogue with a reluctant west, and maintained that his visits were in service of that goal.

“People think this is a gimmick,” Rodman said. “I would love to make this a gimmick and make a sh*tload of money. But it’s not about the money. It’s about trying to open Obama’s mind.”

RELATED: Dennis Rodman Really Wants To Be Nominated For The Nobel Peace Prize

He also openly challenged Obama to approach him about starting talks with North Korea.

“Why, Obama, are you afraid to talk to Dennis Rodman? You’re not afraid to talk to Beyonce and Jay-Z, why not me? I’m pretty important now, right? I got the inside track on what you gotta do. This is not 1953, this 2013. It’s a new era.”

Rodman’s trip, his second visit to North Korea this year, was billed as a “basketball diplomacy” tour. However, Rodman did not use his visit to discuss Kenneth Bae, an American missionary sentenced to fifteen years in a North Korean prison for threatening to undermine the government.

Watch the full press conference below, via UStream. Rodman’s comments begin at 11:50: