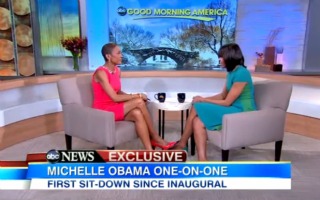 First reported in the Washington Examiner, ABC News edited out first lady Michelle Obama‘s erroneous claim that Chicago teen Hadiya Pendleton was killed when she was shot with an “automatic weapon.” The first lady made this claim in a Tuesday morning appearance on Good Morning America and was quoted in full in ABC News’ online report. The claim was, however, edited out when the interview aired. ABC News responded to the charge on Tuesday saying the cuts were made “solely for time.”

“She was caught in the line of fire because some kids had some automatic weapons they didn’t need,” Michelle Obama said of the late Pendleton, who was shot and killed just days after performing at President Barack Obama’s second inauguration. “I just don’t want to keep disappointing our kids in this country. I want them to know that we put them first.” 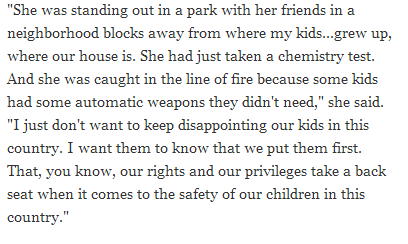 Chicago police claim that Pendleton was killed when she was caught in crossfire. The suspect likely used a semi-automatic handgun.

GMA‘s producers edited out Michelle Obama’s claims that Pendleton had “just taken a chemistry test” and that she was killed because “some kids had some automatic weapons they didn’t need.”

Mediaite reached out to ABC News for comment. A spokesperson for ABC News replied saying that the cut was made solely due to broadcast time constraints:

The full story was posted to our website in advance of the interview being broadcast. The edits made to Robin’s interview with the First Lady were made solely for time.

Read the report in the Washington Examiner