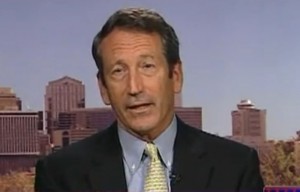 Former South Carolina Governor and Fox News contributor Mark Sanford wandered off the Appalachian Trail again Sunday morning when, in yet another completely isolated example of a Republican being totally-not-racist even though he sounds racist, said that President Obama is going to “come out and throw a lot of spears” at Tuesday’s upcoming debate.

America’s News HQ anchor Shannon Bream wasn’t in the shot, but she didn’t react audibly, and never skipped a beat in continuing to discuss expectations for Tuesday’s debate.

Gov. Sanford first praised former Massachusetts Governor Mitt Romney‘s performance at the first debate, then predicted that “You know, obviously Obama will come out in this case much more forcefully and he will throw a lot of spears.”

Completely coincidentally, and not at all related to this, the term “spearchucker” is a racial slur against black people, but what would a 52 year-old white guy from South Carolina know about that? Also, he didn’t call President Obama a “spearchucker,” he just said he would be throwing spears. That’s completely different

Bream ignored Sanford’s declaration, instead guiding the discussion around to a sort of warning about President Obama being “too aggressive” at the next debate. “We got mixed signals from the Obama campaign that the President intends to be more aggressive this time around,” she said. “We know it’s a town hall format where the candidate will be taking questions from undecided voters, but also with a moderator in place. How well does that play in an audience, and with real live average citizen voters? I mean, there has to be a balance in the tone, I would imagine, for how aggressive you can be in that kind of setting.”