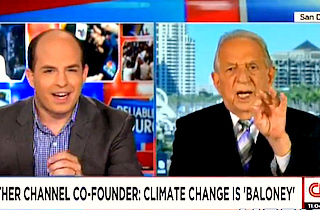 Former Weather Channel co-founder John Coleman made melted-iceberg waves recently when he denied the existence of climate change, to the point that the channel he helped found distanced itself from him. Coleman was defiant on CNN’s Reliable Sources Sunday morning, telling (or rather talking over) host Brian Stelter that his former network had become politicized.

“I resent you calling me a denier, that is a word meant to put me down,” Coleman said. “I’m a skeptic about climate change, not a denier.”

“CNN has taken a very strong position on global warming that it is a consensus. Well there is no consensus in science. Science isn’t a vote. Science is about facts. …It has been become a big political point of the Democratic Party and part of their platform, but the science is on my side.”

When Stelter tried to move on by saying it was unlikely they’d come to an agreement there, Coleman replied, “I know we’re not, because you wouldn’t allow it to happen on CNN. But I’m happy that I got on the air and got a chance to talk to your viewers. Hello, everybody! There is no global warming!”

Coleman was “terribly disappointed,” that his old network was on the climate change bandwagon. “The Weather Channel has bought into it,” he said. “But so has all the media. That’s no big surprise.

“I created a channel to give people their weather, tell them what the weather is now and what it’s going to be. …to serve a real purpose. And that channel has become totally distorted.”