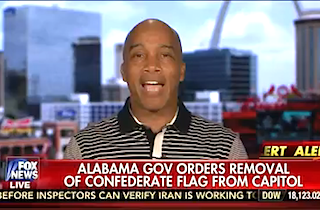 Jackson, who is the author of Race Pimping: The Multi-Trillion Dollar Business of Liberalism

, evidently did not see the value in removing the flag as the Republican governors of South Carolina and Alabama have vowed to do.

“Well, let’s hope that it eradicates racism, Martha, I mean, that’s essentially what the left is after,” Jackson said sarcastically. “You know, they never give up anything. This is such a red herring that takes away from the real issue that liberals created this kid that shot up this church. And South Carolina did what America does, which is they responded by saying we’re a family. We’re not going to buy into this nonsense of it being — it may have been racially motivated but we’re not racially motivated here.”

“So blaming the flag is ridiculous,” he continued. “It’s not going to do anything and, in fact, I think it’s a silly thing to do because what essentially the left is trying to say is let’s eradicate history.”

Rather than questioning what Jackson meant when he stated that the left “created” the Charleston shooter, anchor Martha MacCallum simply said, “interesting argument” and moved on to reactions from Jeb Bush and Hillary Clinton.

In the immediate aftermath of the shooting, South Carolina state legislator Todd Rutherford laid blame on the “hate speech” of Fox News for poisoning the mind of the shooter.

UPDATE — 3:40 p.m. ET: In a statement to the Washington Post’s Erik Wemple, Jackson elaborated on what he meant when he said “liberals created” the Charleston shooter:

He’s a Millennial, i.e. very non-racial according to all data. He didn’t grow up in a white-supremacist family. So he’s a product of culture, a culture Liberals own. From the moment he hit school, in his generation, boys are bad. White boys are worse.

While he played with all kids of all colors and got along, when the time for playing ended, and it was time to get his “higher education,” he hit the wall of Affirmative Action.

Then, when it’s time to get a job, he gets more Affirmative Action.

Saida Grundy made it all too clear that the institution that Liberalism built, “Lower Ed” has no place for white males (or white people) so much so that wackademics prefer to be Indians (case in point Elizabeth Fraudzilla Warren), or blacks (case in point Rachel “HBCU Hates Me” Dolezal).

At some point, Roof had to medicate to deal with his Liberal-created psychosis, and policies of the Left won’t let him be called “insane” and put away from the public. So he FED his psychosis with a healthy dose of Trayvon Martin, Michael Brown, Eric Gardner, and others, until he snapped.

But as they say in prison, “Didn’t do it!” It was the CONFEDERATE FLAGS FAULT!