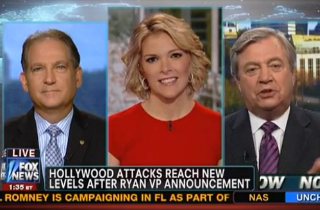 “We put too much weight on these so-called ‘celebrity’ comments,” dismissed South Carolina Democratic Party head Dick Harpootlian, then turning to famously hyperbolic conservative celebrity comments: “How about Ted Nugent on the right who called the President of the United States a piece of doo-doo? And said he had a machine gun he wanted President Obama to suck on? He’s an idiot.”

“Hyperbole on both sides is ridiculous,” he continued. “We have serious problems and we don’t need this hyperbole on either side.”

– RELATED: Russell Simmons: Romney, Ryan Will ‘Destroy Our People,’ ‘Laugh All The Way To The Bank’

Republican strategist Brad Blakeman agreed with Harpootlian and refused to defend Nugent’s comments, adding that “there is nothing more irrelevant than an ill-informed celebrity,” before tearing into Simmons for his attacks: “When this guy talks about ‘his people’ — what people? He should get in his Rolls-Royce and drive outside his mansion in Bel-Air, California, and be with his people. His people are hurting more in the Obama economy than anybody else.”

“Celebrities — whether they’re Democrats or Republicans — are noise. And nothing more,” Blakeman continued. “They don’t move the needle and they don’t convince people to either be for or against someone.”

Harpootlian agreed and said that Simmons should “quit whining,” “put your money where your mouth is” and write a “Koch Brother-sized check to Priorities USA.”