Gingrich On ‘Inclusion’ Vs. ‘Outreach:’ ‘Outreach Is When Five White Guys Have A Meeting And Call You’
Video

Gingrich On ‘Inclusion’ Vs. ‘Outreach:’ ‘Outreach Is When Five White Guys Have A Meeting And Call You’ 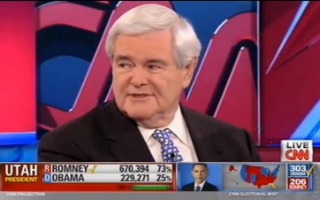 Former GOP presidential hopeful Newt Gingrich stopped by CNN post-election, where host Soledad O’Brien, who confronted him with his previous predictions, saying that “I’m going to throw them out there for you because you were way off, way way.”

So, what happened? Gingrich’s response was simple: “I was wrong.”

“We all thought we understood the historical pattern and the fact that with this level of unemployment, with this level of gasloine prices, what would happen. First of all the President did a very, very effective campaign. Second, I think that the country was looking at a different set at of things than we were looking, and I think Republicans are going to have to take a very serious look at what happened and why did it happen, and why were we not more competitive at the presidential level.”

When asked whether he could have won this election, Gingrich said he had no idea, but urged everyone to “remember that there are two mandates that came out of yesterday. John Boehner and the House Republicans do control the House of Representatives, which is first in the Constitution. And which has a right to say, ‘Gee, we have a mandate, too.’ And the question for the President’s going to be, ‘Is he going to really sit down and listen?'”

As for Republican outreach to minorities, Gingrich stressed that there’s a marked difference between “outreach” and “inclusion:”

And just for our audience, there’s a difference between outreach and inclusion. Outreach is when five white guys have a meeting and call you. Inclusion is when you’re in the meeting, which inherently changes the whole tenor of the meeting. This will be a big challenge for the House Republicans. They’re a very comfortable majority; with a Democratic president they’re likely to stay a majority for a long time. The question is do they want to, in a disciplined way, create a schedule and a program and include people who are not traditionally Republican order to grow a party that in 2016 is competitive.