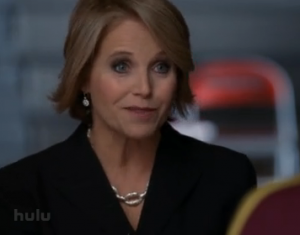 After Sylvester admitted she thought she was being interviewed for “Most Fascinating People,” Couric said she’s not Barbara Walters and informed her of the many other losers from the past year:

“In the voting you beat out the following losers: the economy, Mel Gibson, the housing market, Dina Lohan, Wall Street, Tiger Woods, the Dallas Cowboys, Brett Favre’s cell phone, 9% unemployment, and Sparky Lohan who is Dina Lohan’s dog, and apparently, also a loser.”

Sylvester’s response: “I Hate You Diane Sawyer.” Couric is no stranger to acting, having performed a weird cameo in an Austin Powers movie, and since she’s tried to focus on being more serious lately, it’s nice to see she still makes time for some lighter fare. Given that NBC‘s Brian Williams frequently makes humorous appearances on 30 Rock, that leaves Diane Sawyer as the only network news nightly anchor without some comedic acting. Might an appearance on ABC‘s smash hit Modern Family be such a bad idea for Sawyer?

This Just In: Diane Sawyer is in on the fun too! Sawyer responds to Sylvester’s verbal jab with the response below from Sawyer’s Facebook page:

Watched last night and Sue Sylvester (GLEE) it’s on. As a former Seneca rejected JV wanna-be cheerleader I’ll meet you in the gym…bring the cannon.

Might a dance-off between Sawyer, Sylvester and Couric be far off? Stay tuned.

Watch the clip from FOX below: