Working Out The Glitches: How Are You Feeling About Gawker’s Redesign? 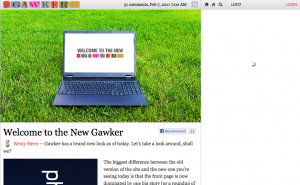 Back in August, we highlighted plans for Gawker’s redesign – specifically Gawker Media boss Nick Denton‘s plans to shift his family of verticals from blogs to websites. It seems, however, that flagship site Gawker’s new look and feel present an unforeseen glitch: It’s taking forever to load.

The current buzz on Twitter (for, despite Denton’s insistence that Facebook, not Twitter, is the preeminent social networking site of the future, it still serves as a quick, simple way of gauging public reaction and opinion) is centering around the new look’s very long loading time, in addition to the slew of Tweets expressing a reluctance to change – which is a reality to be expected for any redesign, really.

Earlier this morning, for instance, Reuters’ Anthony De Rosa noted that “Apparently the new @Gawker takes as long as the @Daily to load.”

As of posting, the site’s “main” story (a post welcoming readers to the redesigned page) loaded just fine, but the sidebar listing the site’s latest stories has yet to load.

Another difference? A drop in pageviews. Gawker’s former editor in chief, Gabriel Snyder, who was replaced by CityFile founder Remy Stern despite having brought in record numbers, Tweeted after the unveiling of Gawker Media car-focused site Jalopnik’s redesign that “pageviews look like they’re down 25-33% in Gawker Media’s new format.” Of course, it would appear that Denton’s new focus is not on raking in pageviews, but, rather, building a broadcast/video advertising model.

So, tell us, how do you feel about Gawker’s new feel? Are you experiencing issues with loading time? Do you think this will set a precedent for other websites to follow?