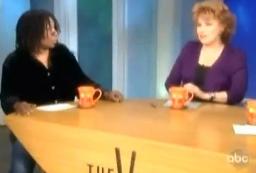 Here’s the answer to the headline: no.

But Joy Behar wondered on The View yesterday if describing the day after Thanksgiving as “Black Friday” was actually racist – and Whoopi Goldberg told her it wasn’t.

Newsbusters reports the conversation at the beginning of The View yesterday, when Goldberg mentioned that it was “Black Friday” – to cheers from the audience. Then came this exchange:

Behar: Isn’t it a little racist to call it Black Friday?
Goldberg: Well, I would have called it African American Friday, but I feel that’s taking something away from it.
Behar: But there’s a negative connotation to it? Or does it mean something else?
Goldberg: No, it’s like when you make all the money. You’re in the black.
Behar: So it’s positive?
Goldberg: Yeah. It’s in the black, so it’s a huge, great thing.
Behar: A lot of times, like blackmail is negative, black sheep.

Actually, there doesn’t seem to be one set reason for the term “Black Friday,” but the possible explanations range from the “huge, great” reason Goldberg describes (stores making money), to a neutral explanation that it’s still dark out when the stores open. But nowhere does there appear to be a “Black Friday” reference to a negative, subconsciously racist connotation.

Still, that is not the case in “Black Friday” – it appears to just be a case of jumping to political correctness conclusions.

At least it looks like “Black Friday Sales Were Encouraging” according to Time magazine.

Here’s the exchange at the top of the show yesterday: