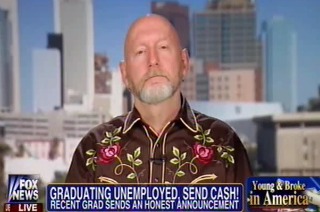 A little less than a year ago, author Larry Winget appeared on Fox & Friends to deliver history’s least inspiring graduation speech for the class of 2012. He informed that year’s class of graduating students that they have been lied to all their lives: they are not unique little snowflakes and they would be best served if they quickly evolved into characterless cogs in whatever machine will have them. Today, Winget returned to give more ill-conceived advice to America’s young people. Though his intention is to divest today’s young people of the notion that they are owed some special treatment from the world, Winget’s advice is more a recipe for mediocrity. One gets the impression, though, that Winget would be perfectly happy to see most of the bright-eyed, idealistic youngsters he’s addressing find their dreams dashed by a pitiless reality he has never quite forgiven.

Winget opened the segment by attacking a recent college graduate who made news last week when she started a viral campaign announcing both her graduation and her imminent status as unemployed. Winget called her entitled and said that he was offended by her impulse to ask others for money without providing a service in exchange. He perked up, however, when he learned that she was prepared to do freelance work and possibly get a job in retail.

Winget moved on to his list of rules for recent college graduates to find success.

Rule 1: Get a job. Any job. “You’re probably not going to get a career in your chosen field, so just get a job,” Winget said. “You’re not too good to say ‘Do you want fries with that?’”

Okay. A little harsh, but this sounds good so far. Hell, life is harsh sometimes.

Rule 2: Move out. “Your goal is to become independent,” Winget added.

Hold on… Didn’t we just say that graduating students should get jobs in fast food or retail, which often pays at or under the minimum wage? It is certainly possible to do this and survive, but it is exceedingly difficult to do this near any major metropolitan area of the country – where most college students graduate and proceed to put down roots. These two items of advice seem somewhat conflictual, Larry.

“Don’t tell me that you can’t afford to do that,” Winget shouted back at me. “Find five or six friends, a bunch of roommates, move into a studio apartment and learn about how to take care of yourself and pay your own way.”

Again, Winget’s advice cruxes on inflicting maximum discomfort on the graduating student. How is it suboptimal to get the service job and pay rent while still living at your parent’s home? Is that not teaching sufficient life lessons because it is a slightly more contented existence, or is hardship the real desired outcome here?

Rule 3: Watch your money. “You need to learn to spend wisely,” Winget said. “Which means, spend less money than you make.”

WHAT!? Okay. So, we have a recent college grad, working in fast food, living in a studio apartment in an urban or suburban center, taking transportation of some kind (we’ll assume public transportation because Winget would probably find owning a car frivolous when you can just hitchhike), and this younger version of Suze Orman can somehow find a way to put a few bucks into a savings account (service fees included) every week?

“And, pay back your student loans,” Winget added with a glee concealed by his monotonous delivery. Now you know he’s just provoking you. Even a modest subsidized loan payment, when it finally comes due and after a few rounds of negotiating with the lender, comes in at around $200 a month. Just throw that on top of our rent-paying, burger-slinging, scrimping and saving college grad.

Finally, just to be crotchety, Winget advises students to “be careful with their social media.” He also advises kids to “keep learning” and read non-fiction books. By candle light, presumably, because you don’t have any money to go out or pay the electric bill, so what else are you going to do to pass the time?

Winget’s advice is quite simply duplicitous. It does not help that he’s delivering his sermon with a noticeable strain of contempt for the individuals he claims to be advising. His is a prescription for economic stagnation in life, not career advancement. In a world in which the cost of living has increased 67 percent since 1990, it is perfectly acceptable for students to make some tradeoffs – including living at home after graduation. This is not free-riderism; it is the result of a careful cost/benefit analysis.

Students, feel free to ignore Mr. Winget. He probably won’t mind if you do either, so long as you all stay off his lawn.