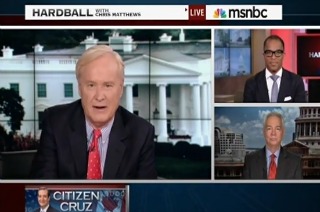 MSNBC host Chris Matthews went off on Tuesday about what he characterized as a variety of efforts by Republicans and conservatives to “delegitimize” President Barack Obama. Among the efforts he cited to prove this case are Republicans calling Obama “a liberal leader,” or simply “Obama,” instead of “The President of the United States.”

Addressing Bush’s Brain author Wayne Slater, Matthews tore into what he saw as GOP efforts to ensure that the president’s legacy is a mixed one.

“It seems there’s a very interesting compelling continuing effort to delegitimize this president,” Matthews insisted. “People on the right say he’s a disaster, which he’s not. Look at what he’s already accomplished.”

RELATED: Top 9 Chris Matthews Moments That Will Send a Thrill Up Your Leg (Or Not)

“They’ve changed it so much that he’s actually not really supposed to be there,” Matthews insisted. He said that this is part of a concerted effort to create the conditions whereby history would regard Obama as an illegitimate president. “And I’m not paranoid,” he concluded.

“I think that’s right,” Slater agreed. He said that most of the opposition to the Affordable Care Act stems from the fact that it is commonly referred to as “Obamacare.”

“Yes,” Matthews agreed emphatically. “Get him off the record books.”