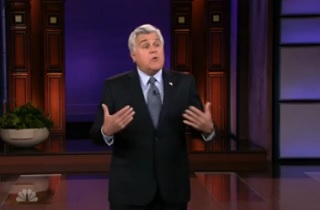 On Thursday night, future former Tonight Show host and National Treasure Jay Leno took on the roiling NSA data collection story with the wit and sophistication his fans have come to expect. During his monologue, Leno joked that the saddest part of the story is that “it turns out 90% of phone calls Americans make are to order a a pizza,” and followed that bon mot with the observation that “When I was growing up, I was, we were afraid of Big Brother watching us. Now with Obama, we actually have a brother watching us!”

Get it? Because he’s black!

Wait, sorry, I screwed up the transcription. What Leno actually said was “Now with Obama, we actually have a brothahh watching us!”

In case anyone in his audience missed the translation, though, he repeated the line in White English, adding, “You see what I’m saying? We got a brother watching us.”

Oh, my God, I’m still laughing, because President Obama really is a brothahh! See, “Big Brother” is a reference to the dystopian George Orwell novel 1984, and “brother” is a slang term for a black man.

Still, I think Leno could improve bits like these if he went to Robert Townsend‘s Black Acting School, and really learned to get his jive on. You gotta really drag the syllables out, like “We actually have a BRUH-thuuuuhhhh watching us,” and you gotta get your behind swaying, and maybe throw in a pimp-walkin’ hand gesture. At this rate, he’ll be in line to replace Bill Maher when the Tonight Show gig is up, which might actually be a big improvement.

In a statement filtered through Jay Leno’s imagination, President Obama responded to Leno’s crack this way: