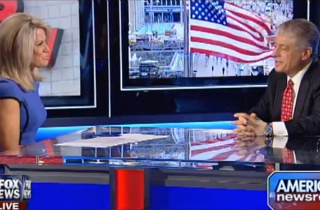 Appearing on America’s Newsroom this morning, Fox News senior judicial analyst Judge Andrew Napolitano took on the controversial CVS policy of forcing its employees to submit personal health information as part of receiving health insurance coverage from the company. The outspoken libertarian posited that the unpopular mandate is a consequence of federal micromanagement of health-care through ObamaCare.

The largest retail pharmacy chain in the country is now requiring its employees to hand over personal health information like their weight, body mass index, and glucose levels or face an annual fine of $600. The company says it is requiring this as a way to ensure their employees are as healthy as possible.

The judge noted that under federal law, CVS has an interest in hiring only healthy employees in order to save money now that they are forced to cover all of their workers. “So will ObamaCare result in larger people with larger body mass and higher glucose levels not getting employed? Would that be an unintended consequence of ObamaCare?” he suggested.

He later explained that the policy is “so expensive because ObamaCare has a one-size-fits-all,” meaning people cannot tailor an insurance policy to met their individual needs. “We knew that was coming but I don’t think we realized — even those of us who didn’t read all 2700 pages but have a good understanding what is in there — we didn’t realize the economic effect of people not being able to get jobs because they’re overweight. Maybe judges will have to decide what is obese? Is it 10 pounds heavier than your height? Is it 20 pounds? Is it 50 pounds?” he added.

MacCallum pointed out that CVS defends itself by noting that 79-percent of other companies have a “health assessment” policy in place. “The fine clearly helps to pass along the cost of ObamaCare to the employee, right?” she asked.

“Absolutely,” the judge replied. “Because contrary to what the president said, these insurance policies will cost more than the coverage you had before the federal micromanagement.”