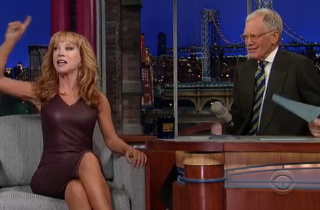 Just a day after getting down and “tickling” Anderson Cooper‘s “sack” during CNN’s live New Year’s Eve broadcast, comedienne Kathy Griffin appeared on The Late Show to proudly defend her controversial on-air actions and boast that she tried to blow CNN’s “Silver Fox.”

After discussing her new television show for a bit, Letterman brought up the New Year’s moment: “You went down on Anderson Cooper or something as the ball dropped. What did you do to Anderson Cooper?”

“If you think this is the part where I’m gonna apologize for trying to go down on Anderson Cooper, you are sorely mistaken,” Griffin joked to laughter and hollers from the studio audience. Conservative organizations such as NewsBusters condemned Griffin for her actions, labeling them “vulgar” and “lewd.”

“I tried, ladies and gays,” the comedienne said. “I tried for you.”

Later in the interview, Letterman asked Griffin, “Let’s say a man on television did that to you. What would the reaction be?”

Her response: “If it was Anderson Cooper, myself and every other gay guy and women would say — I’d unzip so fast. Boom! Pants down!”

Griffin eventually brought up that she had received an email message from rival New Year’s TV host Ryan Seacrest: “He emailed me, and I thought very coyly said, ‘How did your show go? And then I said, ‘Well, I tried to blow Anderson Cooper. How was yours?'”