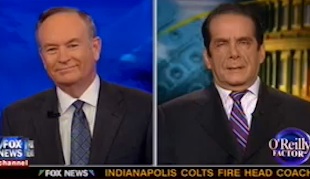 Conservative columnist Charles Krauthammer sat down with Fox News’ Bill O’Reilly and opined that Newt Gingrich won last night’s debate — in fact, he “won big.” Krauthammer criticized Mitt Romney‘s mediocre debate performance and was incredulous at how the former Massachusetts Governor wasn’t prepared for a question on his tax returns. “How could he not have prepared a nice short succinct humane answer about what he did at Bain?” Krauthammer perplexedly exclaimed. “He didn’t really have that — he kind of stumbled around.”

RELATED: Rick Perry Challenges Romney: ‘Mitt, We Need For You To Release Your Income Tax’

O’Reilly wondered why Romney was apprehensive to explain his capital gains tax policies. “I don’t know what they are afraid of, I think they are intimidated by the press,” O’Reilly observed quizzically. “I really think the press intimidates Romney and some of the others.”

“I don’t know if it’s the press,” Krauthammer replied. “But he simply doesn’t have the capacity to explain with some color and sort of force conservative ideas. He is a businessman. he, you know, he looks like he is chairing a meeting of the board….Why didn’t he say in the debate last night: Look, when the Democrats, the ones who supposedly are the ones who are the champion of the Middle Class or Working Class took control of GM and Chrysler, hundreds, thousands of people lost their jobs, dealerships were shut down, the Pontiac and other lines were shut down. You have to do it to save the company to enable it to survive and then to grow it as it is now beginning to grow and restore the jobs.”

“If he had just explained that and took the playbook out of what the Democrats have done, he would have had a forceful answer, but for some reason he simply deflected it.”