Leaked Audio Catches Mika and Joe Chatting With Trump During Break: ‘Nothing Too Hard, Mika’ 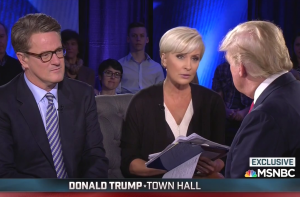 Comedian and voice actor Harry Shearer somehow got his hands on audio of Mika Brzezinski and Joe Scarborough chatting behind-the-scenes with Donald Trump in between breaks of their MSNBC town hall, playing it on his weekly radio show Le Show.

Throughout the six minutes or so, Trump and the MSNBC hosts chat amiably about a variety of topics, including politics, the primaries, golf, Morning Joe‘s coverage of Trump’s campaign, and their fellow journalists. On at least one occasion, the duo appear to discuss questions for the next segment within earshot of Trump. At times it can be difficult to determine who is speaking to who; Brzezinski and Scarborough appear at several points to be speaking to producers who were not picked up by the mics at the same time they were speaking to Trump.

RELATED: MSNBC’s Donald Trump ‘Town Hall’ a Joke, and Not a Funny One

In his intro, Shearer explains that he was broadcasting the audio after news reports suggesting the Morning Joe hosts were too close with the Republican presidential candidate. “You can cut the adversarial tension there with a knife,” Shearer jokes. “A butter knife, but still.”

“You know what I thought was kind of a wow moment, was the guy you brought up on stage,” Brzezinski began by telling Trump.

“We played it several times this morning,” Scarborough put in.

“I watched your show this morning,” Trump responded. “You have me almost as a legendary figure, I like that.”

After that, Brzezinski thanked Trump for agreeing to the interview. “You, you get great ratings and a raise,” he told her. “Me, I get nothing.”

“This will make us all look good,” Trump said, to which Scarborough replied, “Exactly.”

Scarborough and Trump then chatted about their thoughts on his most recent debate performance. “The next morning when I saw the CBS poll, I knew that the people who mattered didn’t think you lost it,” Scarborough said. “I mean, you came in a strong second. And I’ll tell you what was the most revealing thing was [Jeb Bush] came in last, the guy you attacked.”

Brzezinski then tried to ask Scarborough about a question she planned to ask Trump, trying to be discreet but eventually giving away the subject. “Do you not want me to do, the um, the ones with, um, deportation?”

“We really do have to go to some questions,” Scarborough responded.

“That’s right,” Trump agreed, before joking, “Nothing too hard, Mika.”

“Okay,” Brzezinski can be heard telling someone. In the end, there were no questions about immigration or deportations during the town hall. At the same time, Scarborough can be heard discussing potential questions with a producer, and Trump makes a comment indicating he can’t hear what they’re talking about.

At the next break, Scarborough again discussed the upcoming questions. “I’ll talk about the Ron Fournier thing,” he said.

“He understands now,” Scarborough said of the National Journal editor, adding that The Washington Post‘s Chris Cilizza “has completely changed.”

“Three months ago, he went home,” he said of Fournier. “He’s from Michigan, and he got an earful went he went home, and so he changed things. And what he said was, ‘I am no longer going to attack the people who support Trump.'”

“Nice beautiful question, Mika,” Trump said as an aside towards the end of the audio.

Listen above, via Le Show.