Melissa Harris-Perry Discusses Firing on The View: ‘Do I Think It Has Racial Implications? 100%.’ 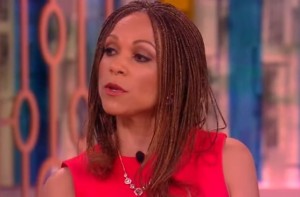 Former MSNBC host Melissa Harris-Perry sounded off about her firing on The View Monday, in particular addressing the aspects of her open letter that many saw as an accusation of racism.

“I will not be used as a tool for their purposes,” Harris-Perry wrote when airing her grievances with the network. “I am not a token, mammy, or little brown bobble head. I am not owned by Lack, Griffin or MSNBC.”

Host Joy Behar read off that quote for Harris-Perry. “Is the implication that there’s some racism in there?” she asked.

Harris-Perry responded that she was writing in “shorthand” for the benefit of her staff and didn’t realize others would see it: “I’m an African-American politics scholar. When I say ‘mammy,’ I mean something very particular. The history of mammy is that mammy is the black woman who cares more about the master’s family than about her own.”

“Did I think it was racialized? Not in the sense of they’re coming after Melissa for being black,” she said. “Do I think it has racial implications? 100%.”

Harris-Perry noted that she had the most diverse show in cable news in terms of the guest makeup. “It’s just an empirical reality. Taking this show off the air, even if you put me individually back on as a host meant that the folks who sat at our table, whether they were transgender, women of color, Latino Republicans, they just weren’t going to be there anymore…”