Blue-collar icon and host of shows like Dirty Jobs and CNN’s Somebody’s Gotta Do It Mike Rowe revealed on Facebook that he was once pegged to become the host of Comedy Central’s The Daily Show.

Rowe was responding to a fan, who asked him how he dealt with rejection. He responded by posting a picture of himself pretending to cry while holding his rejection letter: 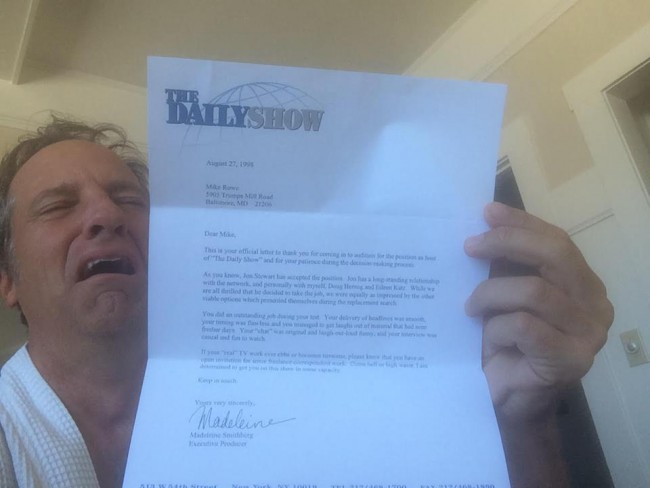 “Unless you’re a robot or a psychopath, it’s very hard to not take a personal rejection personally,” he wrote. “The hardest one for me to accept is explained in this letter, which I received 17 years ago from a very decent Executive Producer at The Daily Show. It’s one of the nicest rejection letters I’ve ever received, but it was nevertheless devastating, because I knew then with certainty that this was my ‘dream job.'”

“When The Daily Show was first conceived, Comedy Central spent a year looking for the right host,” he said. “The audition process was extensive, and when the dust settled, it came down to two – Craig Kilborn and me. The job went to Craig, and I was crushed.”

But a year later, Kilborn left the show. “I went in for another audition. This time, I wasn’t going to let it get away. I did the very best job I could, and all modesty aside, I killed it.”

But alas, it was not meant to be. “Afterwards, I was told by the producers and writers that I was about to become the new host of The Daily Show, unless – by some miracle – Comedy Central were to suddenly cough up the kind of money that could entice a proven entity like Dennis Miller or Jon Stewart. Of course, we all know which way the mop flopped, and I was once again, devastated.”