Erick Erickson: Conservatives Must ‘Not Descend into a Hell of Rage’

Erick Erickson: Conservatives Must ‘Not Descend into a Hell of Rage’ 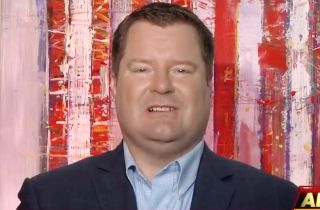 The conservative Fox News contributor, radio host, and firebrand took to his website Friday morning to plead with like-minded thinkers to “recalibrate” away from hatred and viciousness and towards something that resembles “happy warriors.”

Erickson has allegedly been the butt of hateful emails and voice messages ever since he disinvited Donald Trump from the RedState Gathering over the Republican candidate’s remarks about Megyn Kelly‘s “bleeding.”

“Conservatives have a real and legitimate reason to be pissed off at the GOP,” Erickson wrote after posting half-a-dozen uncensored emails loaded with vulgarities aimed at him and Kelly. “That anger has galvanized conservatives and pushed them toward Donald Trump. To his credit, he has capitalized on that anger.”

Erickson then implored that his comrades resist releasing their anger, because anger can destroy them:

[T]his is anger at an unhealthy level. It is anger that has gone beyond the righteous anger of repeated betrayals from Washington. It is an anger that has become unhinged and is potentially uncontrollable. Anger at that level is more often destructive than constructive.

[…] But I know we cannot beat Hillary Clinton with this level of anger. We won’t be able to draw people to our side and our cause like this.

I get the anger. I do. I am angry at the betrayal and the repeated lies from Washington Republicans who say they love children, but won’t even defund Planned Parenthood.

[…] But I don’t get this anger. If this is the anger that flows out of Trump supporters, I do not think it is sustainable. Yet it comes daily. It is poisonous to debate, to democracy, and to the soul itself.

He warned against being “consumed by anger,” even at a president he so dislikes, because “Conservatives must be happy warriors.” The pundit concluded:

We will not win if the loudest voices are these. You will not turn anyone toward your cause with a scowl and a pointed finger instead of a smile and outstretched arms.

Conservatives must rise to the occasion, not descend into a hell of rage.

Good luck! If recent weeks are any indication, Erickson’s only inviting a few thousand more tweets calling him a “cuckservative” or the newer insult: “GOP Smart Set.”