My Client Was ‘Absolutely’ Framed, Says Lawyer Of Man Accused Of Sending Ricin-Laced Letter To Obama 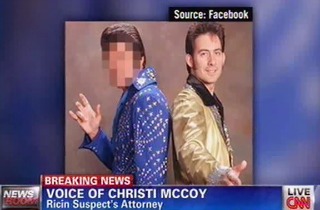 The Mississippi man released on Tuesday after being detained and accused of sending ricin-laced letters to President Barack Obama and Sen. Roger Wicker (R-MS), according to his attorney, Christi McCoy, was framed. In an interview with CNN anchor Chris Cuomo, McCoy said that her client, Kevin Curtis, was the victim of an elaborate plot which set him up as the person responsible for sending a deadly poison to some of America’s most prominent elected officials.

“The case has not been dismissed,” McCoy told Cuomo when asked why Curtis’ preliminary hearing was cancelled and he was released from detention on Tuesday.

McCoy suggested that Curtis has not been released to the “general population,” but she stressed that he was not a threat to the public in any way.

“You’re saying he’s the wrong guy?” Cuomo asked. McCoy said that Curtis is innocent of the charges against him.

“I do believe that the government did what they believe was in everyone – everyone’s best interest because of where the evidence pointed at that time,” McCoy replied.

She said that Curtis is an “activist” and is passionate about the organ and tissue donation industry. McCoy said that the signature which Curtis used on social media outlets, “I am KC and I approve this message,” became of interest to authorities when that signature was discovered on the ricin-laced letters sent to elected officials.

“You think somebody was trying to frame him?” Cuomo asked.

“I absolutely do,” McCoy replied.