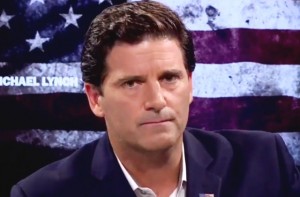 Newsmax host Dennis Michael Lynch went off-script tonight and declared tonight, “This will be, odds are, my last night.”

Lynch hosts the program Unfiltered, and tonight he took a moment to speak from the heart and recall the words of a mother of a 9/11 first responder about how he’s the kind of man “who puts his money where his mouth is.”

He revealed to viewers that in “fighting for Trump” on the air, he has “been restricted” in that message and was recently informed he “will no longer have editorial discretion on my own.”

What bothered him most of all was that the network was pushing “pre-made packages” on his show. He said last night he saw one that “tried to slam Fox News for the unfortunate things that are taking place over there right now.”

Newsmax, being a conservative channel, is a competitor to Fox, but Lynch was outraged that they would be running news on the Roger Ailes allegations when “they’re the only other guy in the room trying to fight for the same thing I am.”

Lynch told his audience that it’s hard to say goodbye, but declared, “I am proud of what I just did and what I just said.”

And then he was taken off the air:

Lynch posted his opener to Facebook Live and in the video below, you can see what happened after they went black and found out they were off:

When the program finally returned to air, there was another host filling in for Lynch. They immediately ran a report on Fox and Ailes.