Obama Goes All-Out in Final WHCD Speech: ‘The End of the Republic Has Never Looked Better’ 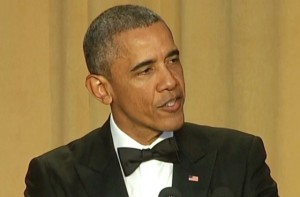 President Obama went for broke in his final White House Correspondents Dinner speech tonight, starting out by literally declaring, “The end of the Republic has never looked better.”

He reflected a lot on his legacy and his past pleas about changing the tone in politics. The president added, “In hindsight, I clearly should have been more specific.”

Obama had a bit of fun roasting a lot of reporters in attendance (i.e. “Jake Tapper left journalism to join CNN” and calling Spotlight the “best fantasy film since Star Wars“) before getting around to the 2016 race.

And boy, was there a lot of material to work with. He singled out two people in the room: Reince Priebus, who he complimented for running a totally smooth campaign, and Bernie Sanders, who Obama told it “hurt” him a little bit to see the Democrat abandon his fellow “comrade.”

But it didn’t take long to get to Trump. And, um, hoo boy:

“He has spent years meeting with leaders around the world. Miss Sweden, Miss Argentina, Miss Azerbaijan. And there’s one area where Donald’s experience could be invaluable, and that’s closing Guantanamo, because Trump knows one or two things about running waterfront properties into the ground.”

The president also complimented the media in a very tongue-in-cheek manner, saying, “Following your lead, I want to show some restraint. He’s gotten the appropriate amount of coverage befitting the seriousness of his candidacy. I hope y’all are proud of yourselves.”

Watch the president’s full speech above, via C-SPAN.