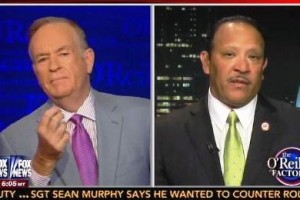 Bill O’Reilly tonight fired back against the criticism he got for his Talking Points Memo last night declaring that no one in a position of power, not even President Obama, has a clue about how to deal with the problems within the black community. He charged that the “civil rights industry’ doesn’t want to address black crime because reforming it would mean “black culture would have to change.” He then clashed with guest Marc Morial over whether civil rights groups are doing enough to address these issues. Morial repeatedly told O’Reilly they need to come together and have a conversation with people like O’Reilly about what to do, but O’Reilly dismissed it as a non-starter and shouted at him to “stop the BS!”

Morial, president of the National Urban League, told O’Reilly he was disappointed by how his provocative comments Monday night basically boiled down to “name-calling, castigating, and attacks.” O’Reilly shot back that he probably “didn’t understand the question” and told him that the black crime problem is “because of the disintegration of the African-American family.” Morial partially agreed with O’Reilly, but when he noted that there is also a disintegration of the traditional nuclear family, O’Reilly charged it’s not to the same extent as black families.

The two went back and forth for a bit, Morial setting O’Reilly off when he called for a national conversation on these issues. O’Reilly charged, “What you’re doing is not working,” telling him and other civil rights leaders to “stop the BS, stop the diversions!” He specifically cited young black women having babies out of wedlock and discipline in inner city public schools as issues that black leaders aren’t addressing. Morial fired back, “Obviously, you haven’t been listening that closely.”

O’Reilly shouted, “Show me the ad! Show me the campaign! Show me!” Morial tried to calm O’Reilly down by playing up the issues they agree on, but O’Reilly continued to insist the problem goes beyond that, blaming a “grievance industry” in the civil rights movement that no one is calling out but him. He concluded that there’s “a lot of people dying while the chatting’s going on.”