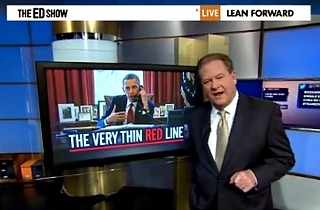 Well, you knew it was coming.

The race card being played from the bottom of the deck…

Schultz contends that GOP opposition of Syrian strikes is rooted not in:

(A) Uncertainly around a post-Assad Syria, where the opposition may somehow be worse than the current regime
(B) Possible repercussions via Iran or Hezbollah to Israel or U.S. embassies and troops in the region, or even through terror attacks here in the U.S.
(C) Making the growing refugee crisis even more grave
(D) A strong majority of the American people opposed to any military action
(E) All of the above

Instead, Ed says Republicans oppose the President because of “hatred of our first black President.” Via Schultz’s MSNBC show on Thursday:

“I really believe that everything that we have said on this show are reasonable, patriotic reasons to be against another war, another strike, another act of war––and that’s what it is––but hatred of our first black president is not.”

If that’s the case, then there are A LOT of racists running around the country these days. First and foremost is the man who replaced him at 8:00 PM on MSNBC, Chris Hayes. After all, he vehemently opposes any action in Syria. Is he—the host with racial quotas for guests—also a racist?

How about Alan Grayson (D-FL), easily the most outspoken liberal in Congress? He wants no part of Syria, either. Even Joe Manchin (D-WV) said, “I cannot support the Senate Foreign Relations Committee’s resolution and will be working with my colleagues and the administration to develop other options.”

That just screams racism, doesn’t it?

The nomadic Schultz has sat in three time slots in the past year alone. He was supposed to be a savior for MSNBC’s failing 5:00 PM spot. Instead, because of 5th grade comments like this, he’s getting pummeled by Fox in his time slot of the month—and by CNN as well.

But it’s really no surprise.

In fact, it’s shocking it took this long.

Courtesy of a cartoon character posing as a serious host who carries his very own deck.