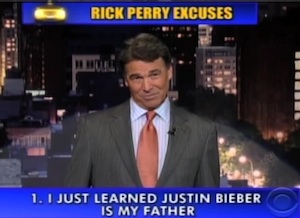 Rick Perry graciously appeared on CBS’s The Late Show with David Letterman Thursday night in the wake of his “oops!” moment at Wednesday’s GOP debate to read Letterman’s Top 10 List. The Texas Governor riffed on several hot topics, from fellow rival Mitt Romney (“one handsome dude”) to Justin Bieber, as he read the list of Top Ten Rick Perry Excuses.

Perry’s gaffe during Wednesday night’s debate was painful to watch, especially for anyone who has ever spoken publicly, but he quickly turned lemons into lemonade by adopting a self-deprecating stance that humanized the event. The Late Show appearance was a prime example of this canny strategy, and while it might not revive his flagging presidential hopes, it certainly takes the edge off of what was a painful moment. Here’s Rick Perry, reading the list of Top Ten Rick Perry Excuses:

10. “Actually there were three reasons I messed up last night. One was the nerves, two was the headache and three was, and three, uh, uh. Oops.”

9. “I don’t know what you’re talking about. I think things went well.”

8. “Hey, I was up late last night watching `Dancing With the Stars.'”

7. “I thought the debate was tonight.”

6. “Hey, listen. You try concentrating with Mitt Romney smiling at you. That is one handsome dude.”

4. “I had a five-hour energy drink six hours before the debate.”

3. “I really hoped to get on my favorite talk show, but instead I ended up here.”

2. “Hey, I wanted to help take the heat off my buddy Herman Cain.”

1. “I just learned Justin Bieber is my father.”

Watch Perry’s top 10 countdown on the Late Show via CBS: