Rubio: If Paul Wants to be Obama’s ‘Chief Cheerleader,’ He Can Go for It
VIDEO

Rubio: If Paul Wants to be Obama’s ‘Chief Cheerleader,’ He Can Go for It 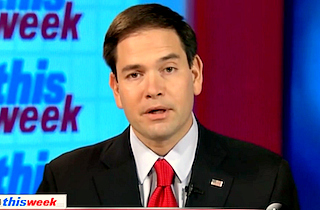 The Rand Paul/Marco Rubio shade war continued Sunday morning, when Senator Rubio (R-FL) basically said that if Senator Paul (R-KY) likes Obama’s Cuban policy so much he should marry it.

“If he wants to become the chief cheerleader of Obama’s foreign policy, he certainly has a right to do that,” Rubio said on This Week. “I’ll continue to oppose the Obama foreign policy on Cuba because I know it won’t lead to freedom and liberty for the Cuban people, which is my sole interest here.”

Paul and Rubio mixed it up this week after they came out on different sides of Obama’s surprise détente with Cuba. Rubio has been the most vocal opponent of Obama’s normalization of relations with the Castro-run island country, while Paul has suggested this was tantamount to isolationism.

Host George Stephanopoulos asked Rubio he would support Paul if he became the GOP’s 2016 nominee.

With all due respect, Senator Marco Rubio was captain of the GOP cheerleading team for Obama’s arming of Syrian rebels, bombing Libya resulting in a jihadist wonderland, and illegally giving foreign aid to Egypt’s military government. The Rubio-Obama foreign policy has made the Middle East and North Africa less safe.