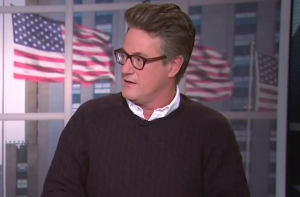 MSNBC host Joe Scarborough questioned whether Republican presidential candidate Donald Trump was mentally well Tuesday morning, saying that he was no longer the man he knew for twenty years and was getting worse by the day.

“Does it have to do with his mental well-being?” asked Scarborough. “I will tell you why I ask you this. It’s pretty remarkable, I fielded calls all day yesterday from conservatives, from Republicans, from officials, from people that the media would call right-wing bloggers… and everybody was asking me about his mental health.”

“It’s not like there was talking points shot out by the DNC or by anybody else,” he insisted. “Everybody was talking about his mental health yesterday, everybody was calling me saying ‘What’s happening to him? What is wrong with him?’”

“I had lunch yesterday with a friend who is not that politically involved and said somebody has to do a psychological profile of the guy and figure out why he acts the way he acts and is he really healthy,” agreed frequent guest Steve Ratner.

“I’ve known him for a decade,” Scarborough continued. “I’ve never seen him act like this before. It’s unhinged, it’s not the Donald Trump I’ve known for over a decade. I never have seen anything remotely resembling this type of behavior from a guy who I’ve known and liked and called a friend.”

Bloomberg’s Mark Halperin said that he was getting similar calls. “I was hearing that a lot yesterday… people were asking me, why can’t anyone around him get him to stop?”

“There was a time when people could talk to him and say this is damaging you, this is hurting you, for the kids, it hurts the name, it hurts the brand. Don Jr. could have a really good future, but right now this is insanity, what’s happened the past four days,” Scarborough concluded.