Shep Smith Excoriates Media for Ebola Coverage: ‘Not Worth the Ratings’
Video

Shep Smith Excoriates Media for Ebola Coverage: ‘Not Worth the Ratings’ 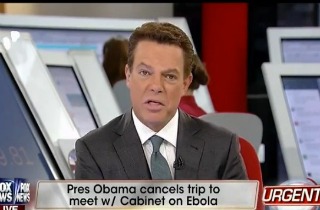 Fox News anchor Shepard Smith on Wednesday lit into the news media for what he described as unproductive coverage of the Ebola cases that have been found and treated in the U.S.

Smith’s moment came after a report from his colleague Doug McKelway, who concluded that Ebola has caused “widespread panic across the country.”

Smith jumped into his soliloquy.

Smith said the Ebola epidemic in West Africa and the cases treated in the U.S. are “very serious” but that “the rest of this (media coverage) should stop because it’s not productive.”

Unlike in West Africa, known cases of Ebola transmission in the U.S. have been limited to one Liberian man who died from it in Texas and two nurse who contracted it while caring for him and are now undergoing treatment. Other Ebola patients in the U.S. contracted the disease while abroad and have also been treated.