So, Unless Giuliani Is Insane, He Apparently Just Admitted the Trump Campaign Colluded With Russia
Opinion

So, Unless Giuliani Is Insane, He Apparently Just Admitted the Trump Campaign Colluded With Russia 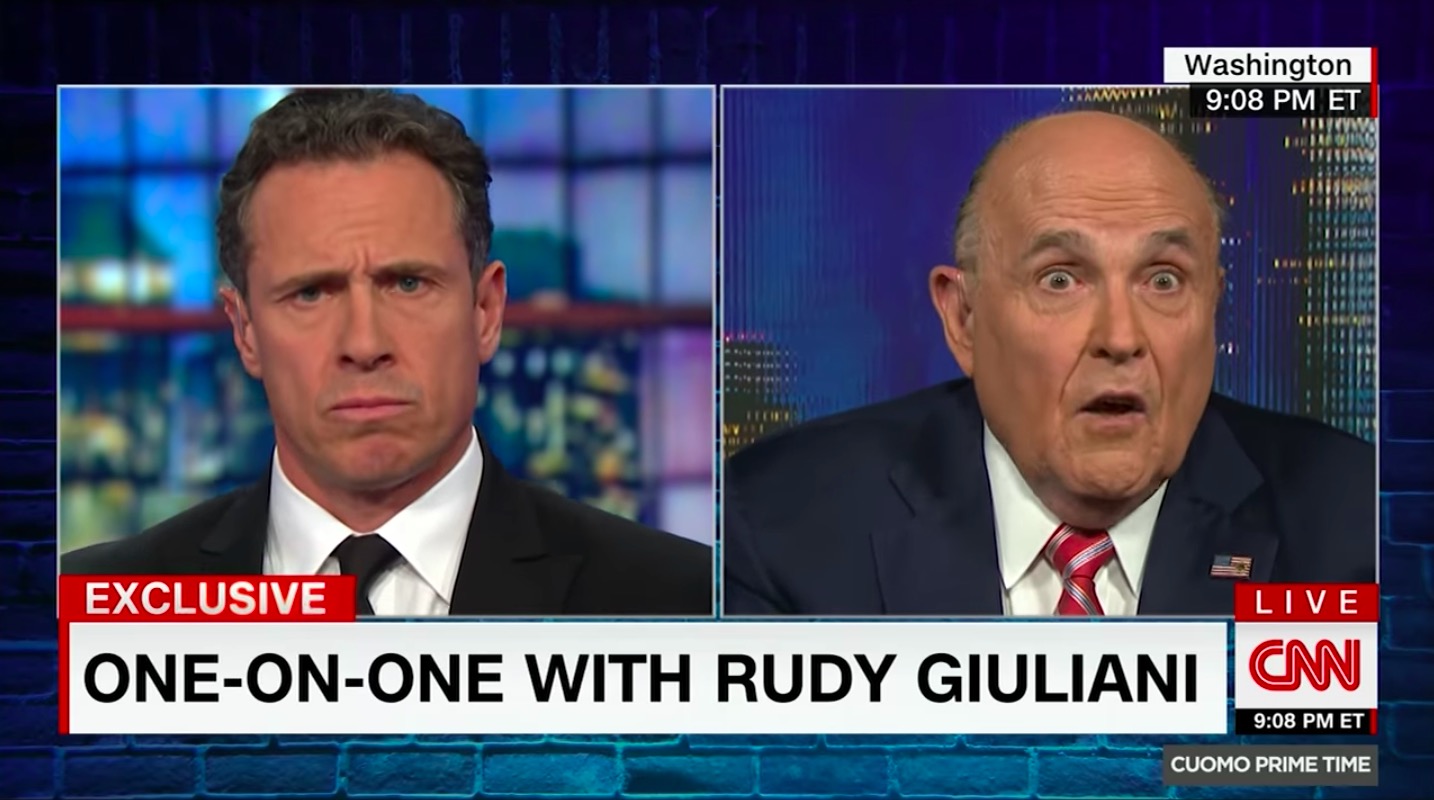 Reading the tea leaves of the Trump/Russia saga is more difficult than solving a Rubik’s Cube with missing colored stickers. This is largely because the key players, specifically President Donald Trump, do not think or act in a way that is remotely consistent with societal norms.

That is why it is so precarious to read too much into Rudy Giuliani’s batshit-crazy response to Chris Cuomo on CNN Wednesday night, where he appeared to admit that the Trump campaign had indeed “colluded” with Russia.  Normally, the president’s own lawyer (for a guy who only hires the very best people, Trump sure hasn’t had much luck with that) going out of his way, on international television, to NOT deny that his client’s campaign colluded with Russia is the equivalent of an admission that this is, in fact, what happened.

But while in the process of moving the Trump/Russia goalposts to somewhere in the stadium parking lot, that wasn’t all Giuliani did. He also seemed to imply that there were people on the campaign who conspired with WikiLeaks, and tried mightily to dig a moat around Trump personally, saying that there was no evidence that Trump himself was involved in this theoretical conspiracy, which the guy once known as “America’s Mayor” appeared to admit actually did occur.

Logically, there are only two ways to interpret what Giuliani said. He was either admitting campaign collusion occurred because he thinks Robert Mueller is going to be able to prove that and he desperately wants to start creating the narrative that Trump was somehow totally isolated from its occurrence. Or, perhaps, he’s playing a game of 3-dimensional chess where he is creating an even greater burden of expectation on Mueller so that his final product will seem, as ABC News’s Jon Karl recently reported is likely, “anti-climactic.”

Of these two possibilities, going purely by watching Giuliani along with Cuomo’s stunned reaction, it sure seemed like this was all far more consistent with the first scenario. It didn’t appear like a planned gambit at all, and, if he was really trying to play the expectations game, he probably would have been far more overt about anticipating that Mueller was going to come up with something really big.

It also would have been remarkably senseless for him to try to laughably claim that Trump and his team have never said that there was no “campaign collusion” with Russia. You would only allow yourself to look that silly (at least, if you are sane) if doing so helped you theoretically protect the president from having lied about all of this.

The interpretation that Giuliani was effectively admitting collusion was so pervasive that a friend of mine who works at a very pro-Trump media outlet told me last night there was a total freak-out there over this episode. When I asked how bad it was on a scale of 1-10, they told me, while somewhat in shock themselves, that it was an “11.”

Part of why many Trump fans might be badly unnerved by this apparent admission is that a “Trump was totally clueless about collusion” defense is only slightly less plausible than Bill Clinton’s infamous attempt to claim that oral sex isn’t really “sex.” As the ultimate control freak, and someone who was intensely interested in anything having to do with Russia, there’s simply less chance of Trump being in the dark about his campaign’s interaction with Russia then there would be of Tiger Woods blindly using whatever clubs his caddie handed him during the final round of The Masters.

This is why the amazing and highly underrated revelation that Trump was still pursuing a Trump Tower in Moscow, at least through the primary campaign, may be so vitally important. That fact alone makes it nearly impossible that he would not have known about the notorious Trump Tower meeting with Russians in New York, and ensures that no one in his orbit would have had the audacity to interact with Russia without him knowing about it.

I got asked a lot last night on Twitter whether this bizarre episode has moved me from my current position that Mueller will unlikely be able to prove collusion in a way that would cause Trump to be removed from office. And that the very likely allegations of obstruction of justice (with maybe perjury as well) just wouldn’t be enough to do it either. My standard response was that, if Trump had a normal lawyer who could be counted on to think and act in a reasonably logical fashion, this development would absolutely cause me to change my opinion.

In this situation, however, there is one other explanation, as mind-blowing as it is, that just cannot be totally discounted… Rudy Giuliani is simply fucking nuts.