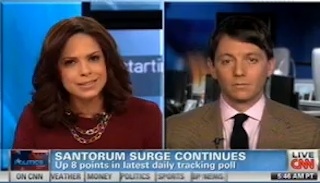 “What’s that mean?” O’Brien asked Gidley. “It’s not a theology…he’s talking about President Obama, not about jobs, it’s about a phony ideal: ‘Not a theology based on the Bible, a different theology.’ Well, what do you mean?”

RELATED: Santorum Explains His Remark Attacking Obama’s ‘Phony Theology’: I Wasn’t Suggesting He Is Not A Christian

“I think Rick has been very clear and probably the only candidate in this race who has actually defended the President’s Christianity and his own personal beliefs,” Gidley responded. “What Rick was talking about was the President’s ideology has turned into a theology of sorts, and he was talking about — you didn’t play the clip before that — but he was talking about the energy crisis in this country. Skyrocketing gas prices across the nation. People are upset and people are angry, but what drives that is a refusal by this President to adequately address energy problems. And instead focusing on green energy and…”

Gidley said that Santorum had repeatedly clarified his comments.