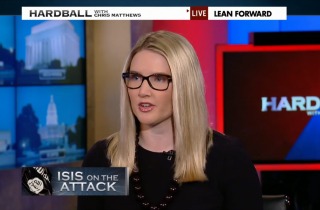 There’s the old adage that “you can’t kill an idea,” and that concept seems to have influenced the thinking behind the administration’s approach to fighting ISIS forces in the Middle East.

Instead, she said, we must use a combination of military force and an exploration of the reasons why so many young people keep joining up with the Islamic State to fight against the West.

“We’re killing a lot of them, and we’re going to keep killing more of them. So are the Egyptians, so are the Jordanians — they’re in this fight with us,” Harf said. “But we cannot win this war by killing them. We cannot kill our way out of this war. We need in the medium to longer term to go after the root causes that leads people to join these groups, whether it’s a lack of opportunity for jobs.”

In return, Harf suggested a soft power-like approach: “We can work with countries around the world to help improve their governance,” she said. “We can help them build their economies so they can have job opportunities for these people.” She conceded, however, that there is “no easy solution.”