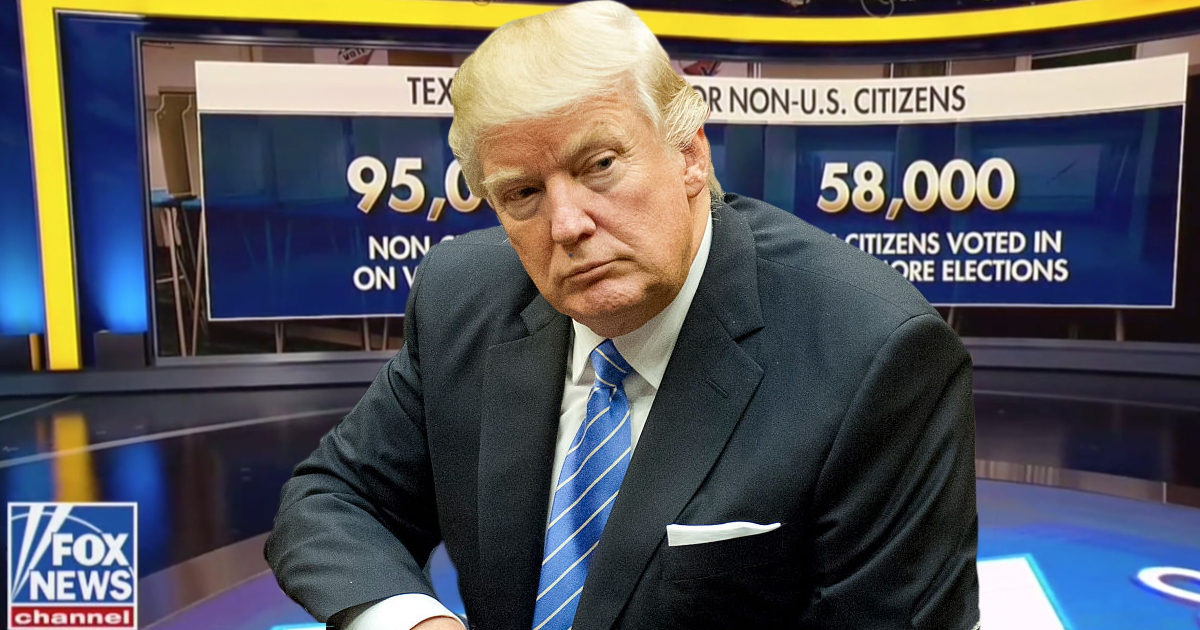 On Sunday morning, Donald Trump kicked off his Twitter day by repeating something he heard on Fox News, to no one’s surprise. In this case, it was a false statistic about vote fraud designed to inflame his border wall base after sorely disappointing them by caving on the wall last week.

Pitching Voter ID as a remedy, Trump said that almost sixty thousand “non-citizens” voted in Texas, and nearly 100,000 are registered to vote. Adding to the Fox and Friends stat, he said it was only “the tip of the iceberg” because voter fraud is “rampant” all over the country.

58,000 non-citizens voted in Texas, with 95,000 non-citizens registered to vote. These numbers are just the tip of the iceberg. All over the country, especially in California, voter fraud is rampant. Must be stopped. Strong voter ID! @foxandfriends

The report that Trump was trying to quote is here:

The Fox & Friends segment opened with a big graphic that incorrectly claimed 58k non-citizen voters,  though host Katie Pavelich correctly stated in the opening of the video that this is being investigated. She also cited this and did not state this as matter of fact.

Trump then retweeted Texas AG Ken Paxton’s reassertion of the claim made in the Fox & Friend’s segment above:

VOTER FRAUD ALERT: The @TXsecofstate discovered approx 95,000 individuals identified by DPS as non-U.S. citizens have a matching voter registration record in TX, approx 58,000 of whom have voted in TX elections. Any illegal vote deprives Americans of their voice.

Unfortunately for the Friends and Trump, that’s not actually what Texas officials said, according to the Texas Tribune.

1/ You might be seeing headlines or tweets tonight that claim Texas says 58,000 non-citizens have voted in Texas. That is not true. That is not what the state has said. Here is what we know. #txlege https://t.co/wyvcrEDkmD

In their article, the Tribune cites the Texas Secretary of State’s office, which said on Friday of last week that they are encouraging various counties to consider checking on the citizenship status of about 95,000 registered voters, based on documentation provided over the last two decades. Yes, decades.

In an advisory released Friday afternoon, the office said it was flagging individuals who had provided the Texas Department of Public Safety with some form of documentation — including a work visa or a green card — that showed they were not a citizen when they were obtaining a driver’s license or an ID card. Among the individuals flagged, about 58,000 individuals cast a ballot in one or more elections from 1996 to 2018, the secretary of state’s office said.

This is from Secretary of State David Whitley‘s official statement:

Through this evaluation, the Texas Secretary of State’s office discovered that a total of approximately 95,000 individuals identified by DPS as non-U.S. citizens have a matching voter registration record in Texas, approximately 58,000 of whom have voted in one or more Texas elections.

It’s not clear how many of the individuals, who again are flagged because of documents they provided when obtaining a drivers license, were or are citizens when they voted or now. Or, as Texas Tribune noted later in their Twitter thread that has been widely shared over the past day:

That is a 22 year time period.

And that does not mean the state is saying 58,000 non-citizens voted. https://t.co/wyvcrEDkmD

5/ First: In its notice to counties, the secretary of state’s office said the names should be considered “WEAK” matches, using all capital letters for emphasis. https://t.co/wyvcrEDkmD

6/ And it is possible that individuals flagged by the state could have become naturalized citizens since they first obtained their driver’s license or ID card.

Again — we are talking about a time period of 22 years. https://t.co/wyvcrEDkmD

7/7 Counties may now choose to investigate the eligibility of the individuals who were flagged.

So it’s unclear exactly how many of those individuals are not actually U.S. citizens and whether that number will be available in the future.https://t.co/wyvcrEDkmD

To be clear, there is sufficient reason to believe that some undocumented individuals voted in Texas elections over the past 22 years.

But given the Secretary of State’s office own explanation that the flagged individuals come from “WEAK” matches, it’s not reasonable to believe that 58,000 non-citizens voted in that time period, nor that any percentage became naturalized citizens over the past two decades. But the facts don’t appear to matter to President Trump and his followers on this, as this claim went viral in MAGA circles over the past 24 hours.

In addition to the incorrect and exaggerated tweet about Texas voters, Trump also harped on the monetary cost of illegal immigration on Sunday, continuing a weekend-long effort to redirect anger on immigration away from his signing of a shutdown deal that did not include wall funding.

Trump has faced a small storm of backlash from his most ardent anti-immigration critics since the deal.

Watch the clip above, courtesy of Fox News Channel.

Edit – This article was updated since publishing to clarify what was specifically false about the Fox & Friends segment.