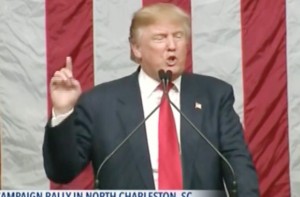 Donald Trump is a human email forward, and if you needed more evidence of that, he provided it in a particularly striking moment at a South Carolina rally tonight.

There has been a persistent rumor for years that United States General John Pershing cracked down on Islamic terrorism in the early 1900s by dipping bullets in pig’s blood and shooting Muslim prisoners with them. This is a hoax. It has never been proven.

So naturally, Trump preached it as gospel during his rally tonight. He started out by saying, “You know, I read a story, it’s a terrible story, but I’ll tell you. Should I tell you or should I not?”

At this point, someone in the crowd shouted out, “Only if it’s true and you’re not just making up shit to rile us up!”

Just kidding, they all cheered.

At one point, Trump even said, “By the way, this is something you can read in the history books. Not a lot of history books, ‘cause they don’t like teaching this.”

“He took 50 bullets and dipped them in pig’s blood. And he had his men load his rifles, and he lined up the 50 people, and they shot 49 of those people, and the 50th person––he said, ‘You go back to your people and you tell them what happened.’ And for 25 years, there wasn’t a problem. For 25 years there wasn’t a problem. All right? So we better start getting tough.”

Again, this never happened. Trump just shared a hoax as gospel on the campaign trail. Oh, and he also implied that part of his “getting tough” strategy might have to be dipping bullets in pig’s blood to shoot the terrorists.

This is yet another great example of how Trump truly has a great public contempt for the facts. He has said he doesn’t care about the factual accuracy of the things he retweets, and he has publicly praised conspiracy nut Alex Jones.