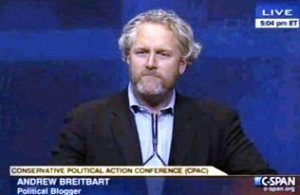 Andrew Breitbart took the podium at CPAC Friday afternoon, introduced to the stage with Rage Against The Machine’s Guerrilla Radio, and revealed to the audience he had “videos” of Barack Obama from his college days. “I have videos, this election we’re going to vet him,” Breitbart disclosed to raucous applause. “We are going to vet him from his college days to show you why racial division and class warfare are central to what hope and change was sold in 2008.”

RELATED: Andrew Breitbart On Dinner With Bill Ayers: He’s ‘A Sociopath’ But A Great Chef

“The videos are going to come out, the narrative is going to come out, that Barack Obama met a bunch of silver ponytails in the 1980s, like Bill (Ayers) and Bernadine (Dohrn), who said one day we would have the presidency, and the rest of us slept as they plotted, and they plotted, and they plotted and they oversaw hundreds of millions of dollars in the Annenberg Challenge and they had real money, from real capitalists. Then they became communists. We got to work on that. That is a parenthesis. Barack Obama is a radical, we should not be afraid to say that! Okay? And Barack Obama was launched from Bill and Bernadine’s salon. I’ve been there.”

Breitbart shared an anecdote about having dinner at their house, and surmised there was no way Obama didn’t have many a meal at their kitchen table.