What New Obamacare Problem Got Megyn Kelly So Angry?
video

What New Obamacare Problem Got Megyn Kelly So Angry? 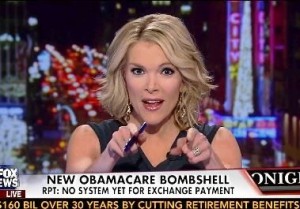 Megyn Kelly kicked off her show Tuesday night utterly bewildered at a report she touted as striking another blow for Obamacare, after two whole months of problem after problem plaguing the health care website. This time, it’s about the payment mechanism for the site, and Kelly was astonished to discover that because no one is able to actually pay for plans on the site yet, the plan is to “estimate” the cost of each plan and for the government to just work out that estimate with insurers.

Yep. A program designed to provide affordable health care to millions of people will be temporarily whittling the payment system down to a crap shoot.

Kelly cited a new report from Reuters on a “short-term” fix for the Obamacare site’s payment system as they get the kinks sorted out.

The administration is planning a “workaround” for payments, said Daniel Durham, vice president for policy and regulatory affairs at America’s Health Insurance Plans.

Health plans will estimate how much they are owed, and submit that estimate to the government. Once the system is built, the government and insurers can reconcile the payments made with the plan data to “true up” payments, he said.

“The intent is to make sure plans get paid on time, which is a good thing,” Durham told Reuters.

First of all, the very fact that the payment system isn’t working was too much for Kelly. She cried, “How does the system work without a payment mechanism?! There’s no cash register!”

But for the government to just estimate the cost of health care plans… to say Kelly was flabbergasted would be putting it in the mildest possible terms.