Cracking the Code of Trump’s Lies: An Extensive Interview with CNN’s Amanda Carpenter 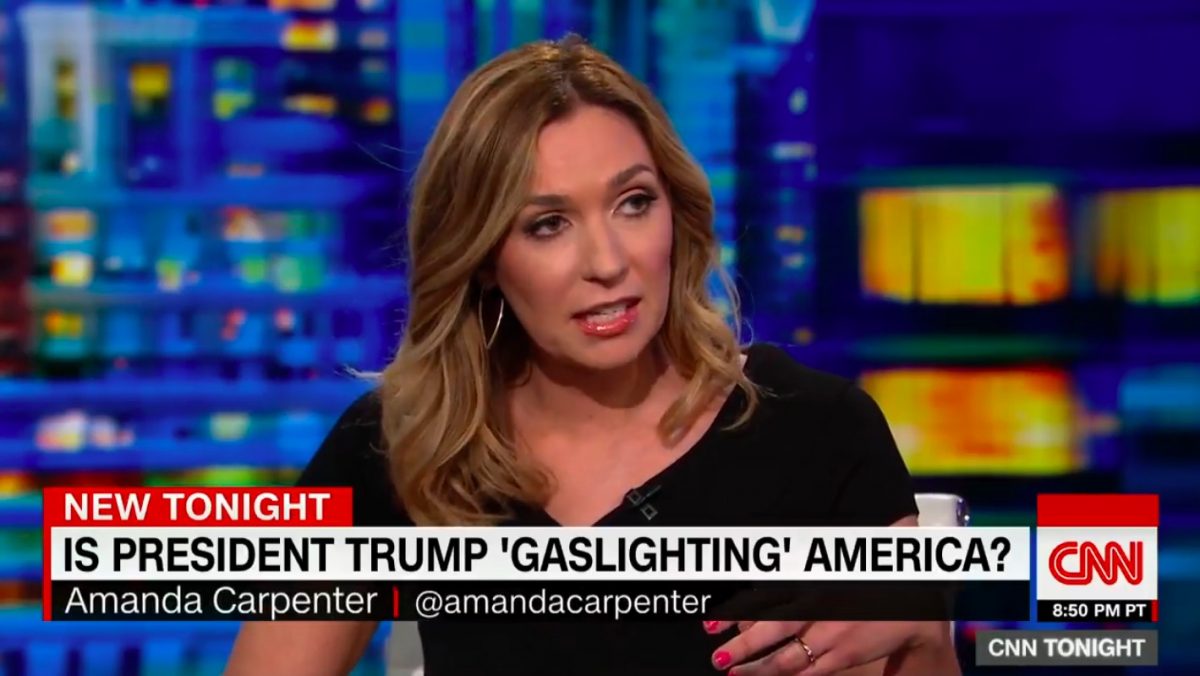 As an ardent anti-Trump conservative, I take a lot of flak from people with whom I used to share a political side. The primary argument against people like me seems to be that, while far from perfect, America and “conservatism” are better off under President Donald Trump than they would be in a Hillary Clinton administration.

My rebuttal has always been based in two concepts. First, I don’t think we will know the real impact of the Trump presidency for at least another ten years, and it is quite possible that the optimistic projections of the conservative Trump apologists will turn out to be very false. Secondly, as a person who values truth over everything else, Trump’s systematic embrace of blatant lying and the total destruction of the value of honesty was a fundamental deal-breaker.

Yes, Hillary, like her husband, had a significant problem with lying, but Trump is a completely different species of fabricator. In a sense, Hillary was “promiscuous” when it came to abiding by the truth, while Trump makes Stormy Daniels seem like the Virgin Mary with regard to his utter lack of morality in this realm.

So for me, it almost doesn’t matter what Trump may do on taxes or judges when he has single-handedly completed the destruction of the value of truth in our society, not for the cause of Making America Great Again, but for his own selfish political gain and survival. To put it another way, “Other than that Mrs. Lincoln, how was the play?”

Just last night, CNN’s Jake Tapper went on The Late Show and mourned the demise of the value of truth in our country. The truth has been devalued in our culture for quite a while, but there is no doubt that, under Trump, it is as if the accepted currency officially went from the dollar (the truth) to the Bitcoin (bullcrap).

For instance, this morning Trump tweeted out another totally unsubstantiated charge which is almost certainly yet another self-serving lie. Relying on non-credible right-wing “reports” which were clearly designed simply to get clicks from his rabid base of “Cult 45” followers, the president of the United States is charging that FBI had a “spy” embedded in his campaign, presumably for the purpose of bringing it down for political purposes.

Forgetting, for a moment, that this claim is both totally unsubstantiated and inherently bat-shit crazy, Trump doesn’t even try to explain how this “theory” he is recklessly throwing out there at the expense of the credibility of our intelligence agencies remotely makes sense. After all, this is the very same FBI which most election experts believe helped hand Trump the presidency with its questionable handling of the Clinton email investigation, while keeping totally quiet during the campaign, even provoking a false New York Times story exonerating Trump, about the far more significant Russian meddling probe.

Until recently, I would have just assumed that Trump was arbitrarily lying on a whim, simply to distract from the real significance, and potential damage, of the remarkable revelation of the FBI’s “Crossfire Hurricane” investigation during the campaign. But now, after reading the fantastic new book, Gaslighting America: Why We Love it When Trump Lies to Us, by CNN’s Amanda Carpenter, I see what is happening in a whole new light.

Carpenter, a fellow “Never Trump” conservative, theorizes that at least some of what Trump does in these situations is actually pretty well planned out through a tactic called “Gaslighting,” which is both dastardly and nearly foolproof. What Trump is doing with the obviously BS “FBI spy” story is actually remarkably similar to what he did with the Barack Obama “Birtherism” lie, upon which he built his presidential run.

Last night, I did an extensive hour-long interview with Carpenter for my podcast. I think you will find this discussion (embedded below) to be quite fascinating and perhaps give you a different perspective on how and why Trump lies, as well as how the media should handle it when he does. Clearly our reaction to Trump’s lies needs to change because he isn’t going to stop this strategy, and the efforts to combat it for the past few years obviously have not worked.