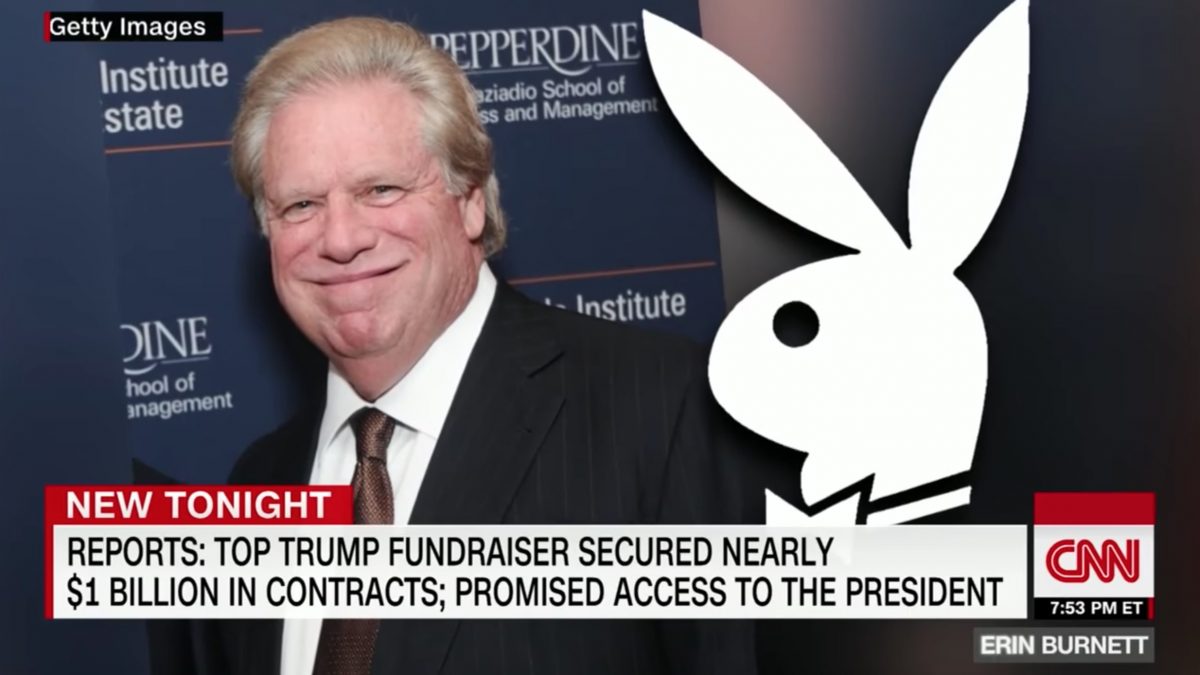 It has often been said, quite accurately, that President Donald Trump is a master of the “Big Lie” theory. This is the concept that the larger a falsehood is, the more likely people will be to believe it, partly because it is difficult for the average person or even cynics in the news media to comprehend the brazenness of its dishonesty.

Over the past month, a story which, if true, would probably be the largest scandal of Trump’s presidency, has been slowly coming together in a way that is both shockingly outrageous and astonishingly clear-cut. However, the vast majority of the news media has almost completely ignored it.

I am referring here to what is likely the real story of former top GOP fundraiser Elliott Broidy, a former Playboy model’s $1.6 million payment for securing an abortion and covering up an affair, President Trump, our policy towards a foreign ally, and large defense contracts. To those very few who have already made all of the rather obvious logical connections, the most probable narrative feels like a movie too unbelievable to ever get made, but most of the media have inexplicably pretended that these are two unrelated stories, neither of which are particularly important on their own.

The narrative here which the news media has, in their usual state of laziness and lack of imagination, blindly accepted is this:

Broidy, an older, out-of-shape, and long-married family man, paid former Playboy playmate Shera Bechard $1.6 million to try to cover up a long affair with her that resulted in a pregnancy. When pressed about it after the office of his attorney (Michael Cohen!!!) was raided, he immediately, and for no apparent reason, admitted the affair and the cover-up. His having profited lavishly from lobbying (as an unregistered agent) Trump to negatively change our country’s policy towards Qatar, a previous ally, is seen as a separate and minor scandal which is lost in the massive of swamp that has become the Trump administration.

To almost all of the mainstream news media, there is nothing else to see here and they have not given these stories a second thought. However Paul Campos, a law professor at the University of Colorado, found this set of facts to be absurd on their face, and wrote a compelling alternative narrative of this situation for New York magazine back in early May.

In it, Campos theorizes, quite convincingly, that none of the known facts make any sense under the accepted scenario, but that nearly all for them line up perfectly if it was Trump who actually impregnated Bechard and that Broidy, who has previously pled guilty to bribing government officials, took the fall in order to gain leverage on the president. I wrote at the time that I agreed with his general analysis of the situation.

About the only thing missing from this theory (other than ultimate hard proof), was some sort of evidence that Broidy was actually rewarded for his amazing act of loyalty to Trump. Well, it didn’t take long for that to surface in a very big way.

It was soon learned that Broidy’s company got its biggest U.S. government contract ever after pitching the Trump administration, though, importantly, the original deal was made in 2014. Even more suspiciously, Broidy secured huge business with the UAE just after having met with Trump in an effort to get the United States to alter its policy on Qatar, a UAE adversary.

All of this caused Campos to write a second piece for New York magazine, which seemingly closed the circle on his original theory about who really impregnated Shera Bechard. Bizarrely, the extensive Associated Press investigation into the Qatar angle mentioned Broidy’s huge payment to the former Playboy playmate, but, amazingly, expressed zero skepticism about that seemingly unrelated portion of the narrative.

Even stranger still, while Campos received very positive feedback to his two stories, there was remarkably little media reaction in public, and no indication to him that the mainstream media was trying to nail down what might easily be the most explosive scandal in the modern history of the presidency. In an effort to learn more about what the heck was really going on here, I invited Campos on my podcast, and the resulting interview was extraordinary.

Not only is Campos very smart and exceedingly credible, he is also as befuddled and disheartened as I am about the stunning lack of interest in this story from major news outlets. He also provided me with some new information which I found to be, at least potentially, very significant.

The prospect of Trump having had a political ally pay off a mistress to have an abortion would be extremely scandalous, even for him. But what we didn’t know, until now, is that there appears to be legitimate evidence to suggest that this affair and pregnancy happened while Trump was the president of the United States!

Campos revealed to me that he has social media posts from Bechard in 2017 which indicate that she told friends that she was due to give birth this past weekend (there is no sign that she is still pregnant). This would mean (based on various pregnancy calculators) that she would have been impregnated near the end of last September.

That time period locks up perfectly with various aspects of the timeline in this case. This includes other social media posts indicating that Trump and Bechard were both in the New York area for multiple days at the end of last September, that she told people she was pregnant in October, and that Broidy got his meeting with Trump to impress the UAE at the beginning of December, which was just a couple of days after he provided Bechard with her first $200,000 payment.

Of course, this could all be a really remarkable series of coincidences. If that’s not the case however, the only other scenario is for this to be a scandal of epic proportions, one which is just waiting to be broken wide open.

Do yourself a favor and listen to the whole interview with Campos here: