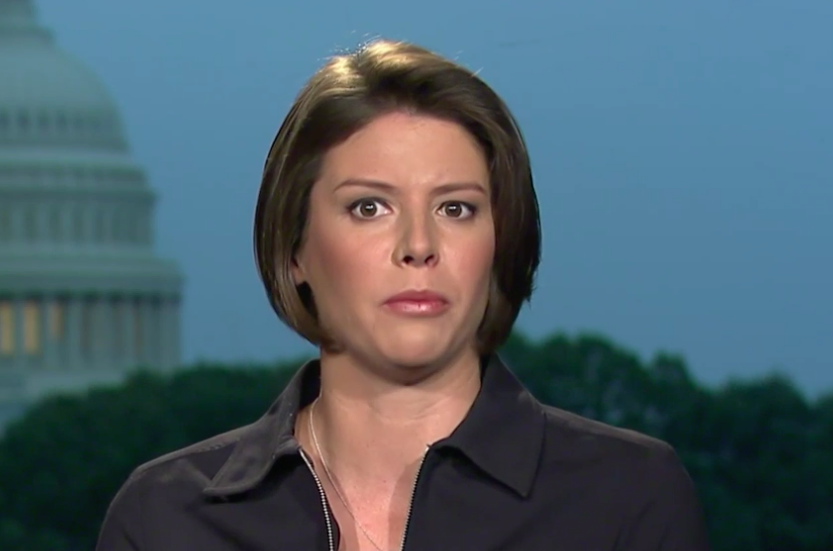 As the breaking story of Al Franken‘s lewd behavior toward Leeann Tweeden during a USO tour in 2006 was developing Thursday, MSNBC’s Capitol Hill Correspondent Kasie Hunt reported to viewers that Franken was “not actually groping” Tweeden in the famous photo that shook the political and media landscape.

KASIE HUNT: We are starting to see some immediate reaction to this on Capitol Hill to those allegations and you covered what she had to say pretty well. In a nutshell, she said she was on this USO tour that Al Franken wrote — he was a comedian then, not a Senator — wrote into the script that he should kiss her. Tried to get her to rehearse it. It was uncomfortable. She avoided him after that. Then he took a picture, which his office now says was of a joke, that showed him potentially —  not actually groping, but mock-groping her while she was asleep.

Not only is this “reporting” inaccurate, Hunt seems to present a political argument that even Franken is not making in his own defense.

“Potentially —  not actually groping, but mock-groping” is how Hunt, the reporter delivered the news. How does she know this? What facts have been presented to support this? I mean, I suppose it could turn out this was “potentially —  not actually groping, but mock-groping” but no one has presented that argument as of now, except, of course, MSNBC’s Capitol Hill Correspondent Kasie Hunt.

Even worse, Hunt also characterized Tweeden’s description of the direct physical assault that culminated with Franken forcing his tongue into her mouth against her will in a completely inaccurate way.

Hunt reported that Tweeden claims Franken “wrote into the script that he should kiss her. Tried to get her to rehearse it. It was uncomfortable.”  Was it uncomfortable?

Let’s please take a moment to read exactly how Tweeden described this incident:

He repeated that actors really need to rehearse everything and that we must practice the kiss. I said ‘OK’ so he would stop badgering me. We did the line leading up to the kiss and then he came at me, put his hand on the back of my head, mashed his lips against mine and aggressively stuck his tongue in my mouth.

I immediately pushed him away with both of my hands against his chest and told him if he ever did that to me again I wouldn’t be so nice about it the next time.

I walked away. All I could think about was getting to a bathroom as fast as possible to rinse the taste of him out of my mouth.

I felt disgusted and violated.

But if someone only watched MSNBC in the middle of the day Thursday and relied on their Capitol Hill Correspondent to report the news of this story, they wouldn’t know those details. They’d think that Tweeden felt “uncomfortable” after Franken forced himself on her, held her from the back of the head, and forced his tongue into her mouth.

This all happened on the same day MSNBC’s John Heilemann called Fox News a “totally corrupt enterprise that has nothing to do with journalism or principle and everything to do with advancing an ideological agenda.”  He said that on MSNBC, the same network that featured Kasie Hunt’s  – not actual reporting but mock-reporting.