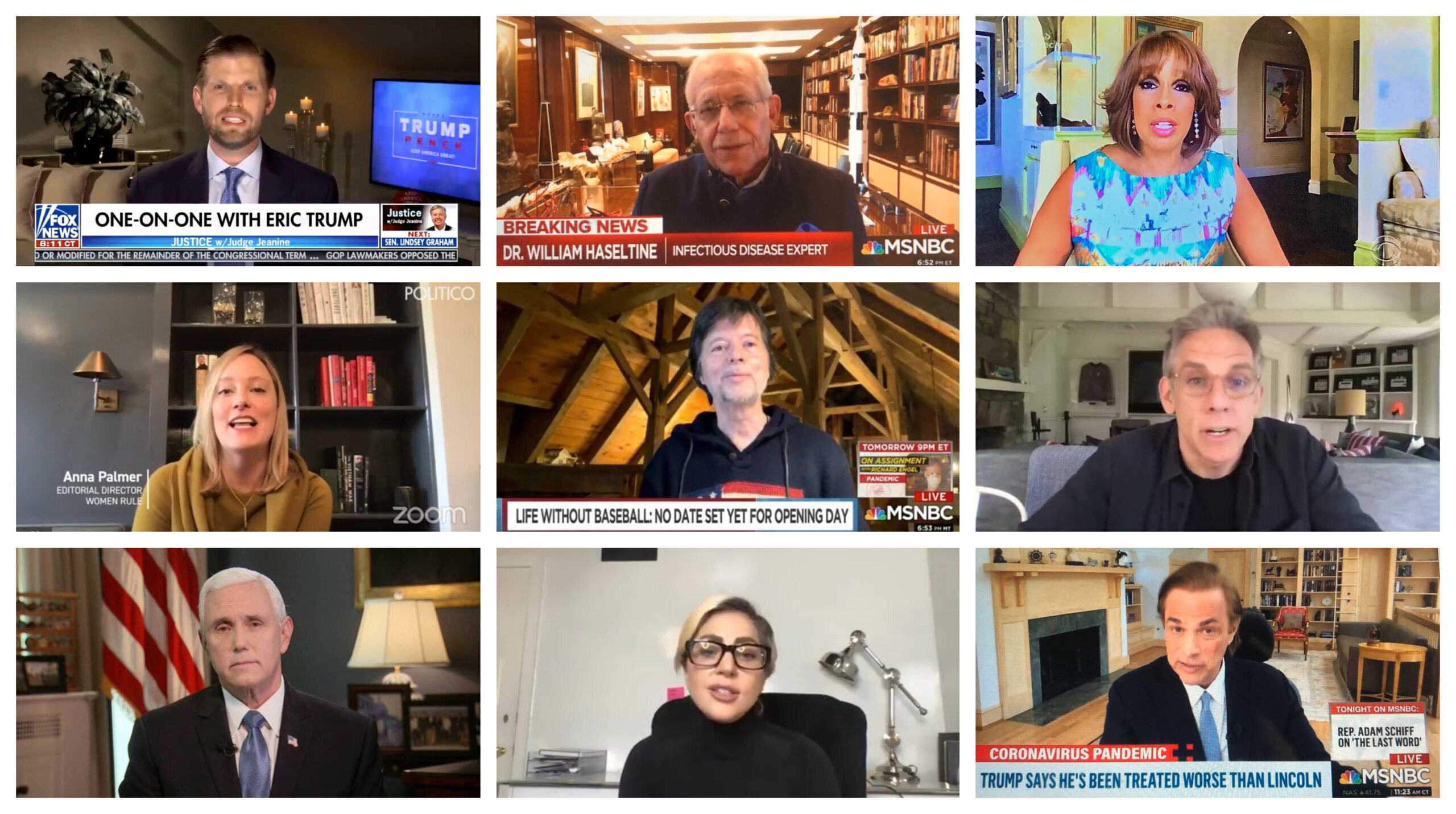 Taylor’s Twitter account, which he runs with his girlfriend Jessie Bahrey, hilariously judges the rooms of celebrities, politicians, and pundits by breaking down their Zoom and Skype backgrounds on a scale of 0 to 10.

Mike Pence, for example, received a 2/10 for being “unimaginative:”

Unimaginative. It’s mother, isn’t it? Come out. Be yourself. 2/10 @VP pic.twitter.com/cbP4rn9XiN

Taylor, however, admitted to Mediaite that political views definitely play a part, noting that some people get bad ratings because “they suck.”

Mediaite interviewed Taylor to find out just how much his bias contributes to the ratings, how one can earn a perfect score, and who had the best and worst rooms.

How did you get the idea to start rating rooms on social media?

I do work, sort of, kind of, in social media, but it’s not always as lighthearted–we also do a lot of Trump monitoring. My girlfriend and I were just on the phone, informally rating pundits and talking heads’ rooms, and then we just decided let’s just make an account … and it just sort of exploded on us. Nobody was expecting it … My primary account, which I’ve had for seven years, is about to be passed by this new account, which was created five weeks ago.

Chris Christie and Eric Trump both received a 0/10, is there a reason for that or were you purely judging their rooms?

I mean, the reason is they suck. I mean can we be honest? There’s no such thing as unbiased. We’re not going to pretend to be unbiased. We like nice rooms, but we also can’t ignore when there’s a complete f*ckwad in front of the camera. It’s impossible to not be affected by that.

You know, there have been some rooms — Jeff Sessions had a nice room. You know, he did. There’s just no two ways about it — it was a nice room. I don’t remember what we said, but it wasn’t entirely negative.

Is that wainscoting in your tiny tree house @jeffsessions ? 3/10 #keeblerelf pic.twitter.com/PjY2Q6LuhU

Who had the worst room?

Well, there’s a type … the hostage video. That’s become a type. The person is appearing before a blank wall. Even people we like. I’m a big Cory Booker fan, I think he’s a great guy, but he keeps pulling out the hostage video.

There are some general principles: try to light it, try not to make it just flat. I mean, even just a wall with a couple of pictures is not going to do that well. It’s kind of a joke at this point, but add a plant, add a lamp. I prefer depth.

Then there is the whole bookcase thing… if you’re going to do books, which is fine, you don’t have to, but if it’s a book dominated room — don’t color code the books! That’s an automatic three-point deduction. I don’t care who you are.

One well known reporter saw the light last night — we noticed what had been a color-coordinated mantle of books was now quite clearly un-color coordinated. So she went from an eight to a 10/10. That was good, that was Ashley Parker.

Room Rater Update: @AshleyRParker has wisely un done the color coded books and shown us greater depth in the room and in judgment. 10/10. https://t.co/PQm0hszWZL pic.twitter.com/CQChig5Ah4

My favorite is not a well known person, but he actually helped start this. He was one of the rooms that I saw at the beginning of this whole quarantine process and I just loved the room. His name is Dr. William Haseltine. You’ll see him occasionally on MSNBC, but he just has an amazing room. I didn’t even know who he was, so I googled him, and he’s the most interesting man in the world. He’s just a fascinating person, retired academic from Harvard.

He has the Holy Grail of rooms … He was the original bar.

We actually do really well with historians. Michael Beschloss has a real, well it’s a bit of a man cave … His room is a 10/10. Great room, great depth, wood, leather, books, fireplace. He’s got it all.

Jon Meacham is another one. He’s had a couple different really good rooms. We do well with presidential historians, I’m not sure why.

There can be elements of design that are just better than any particular bookcase, of flower, or plant. I mean, Ken Burns’ attic just had a great perspective, it had great lighting. The beams of the attic were just this raw timber. It just seemed so perfect for a historian like Ken Burns.

It’s @KenBurns in an attic. That’s a 9/10 right there. pic.twitter.com/cEnW1sfXHP

Just think about what’s behind you. If it’s just a blank wall, move!

At this point, honestly, the orchid is just so cliche, we don’t subtract points, but it won’t get you any points … same with the bookshelf. Everyone in D.C. reads the same 12 books, so if you got the 12 books, OK, terrific, I got it. Unless you’re prepared to move beyond those 12 books, you don’t even get credit. Put some fiction in there! Would it kill you? I mean really. I’m all for the biographies, but that’s not the only printed work.

Maybe hide the Harlequin romances, but if you’re reading science fiction, there’s nothing wrong with that. Show us that you’re actually a reader. I mean honestly, that’s one of my issues with color coordinating books. It’s just not how readers treat their libraries … that’s a prop. It can be a prop but don’t make it look like a prop.