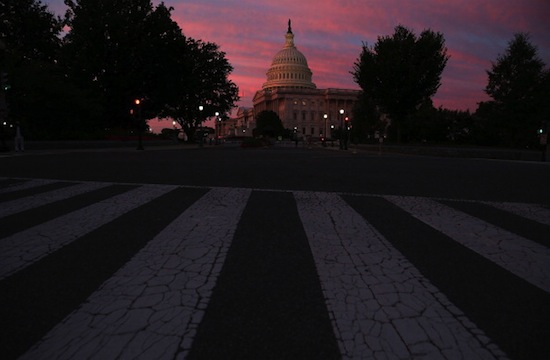 Despite cordial, thoughtful, and measured debate between the Senate Democrats and House Republicans, Congress is reportedly close to a bipartisan agreement to renew the Farm Bill, 484 days after they were supposed to pass a Farm Bill.

(Remember how the current farm bill — AKA the program that funds the entirety of America’s government-run agricultural programs, like food inspection and milk subsidies and exports and feeding the hungry — was supposed to be renewed in 2012? And how that didn’t happen in 2012? )

According to Reuters, the two biggest issues — food stamp cuts and milk subsidies — have finally been resolved, chief among them being cuts to the Supplemental Nutrition Assistance Program (SNAP). The program will get $8 billion slashed from its budget — twice the amount of the Senate Democrats’ proposal, but far less than the $39 billion in cuts proposed by the House Republicans. (The program supplements the food budgets of 47 million Americans, and, as Tom Colicchio’s pointed out in the past, is already struggling to adequately cover their needs.)

For now, though, milk is holding up the resolution of the farm bill, and Big Cheese (as in cheese and dairy product lobbyists) are anxiously awaiting for a milk subsidy deal between House Speaker John Boehner and Colin Peterson, the top-ranking Democrat in the House Agriculture Committee:

Collin Peterson, the top Democrat on the House Agriculture Committee, has championed the Dairy Security Act, a new program that offers producers profit-margin insurance as long as they agree to cut milk output if prices fall below a set level.

Farmers generally support Peterson’s proposal, while processors – who make cheese, ice cream and yogurt, and say it could lead to higher prices for milk – oppose it.

Boehner has been a long-standing opponent of dairy price supports. The speaker has derided the support system as “Soviet-style” and has vowed not to allow a bill with supply management to come to the House floor for a vote.

We wait ALL THIS TIME for a resolution to the Farm Bill and it’s being held up by angry cheese farmers!? It’s like Frodo finally made it to Mount Doom and suddenly, before he can throw the Ring into the fires of Mordor, he has to battle a big block of cheese.

(Seriously, this budget fight’s existed since the time before The Braiser launched two years ago, so yeah, we are exhausted of this partisan bickering and look forward to not mentioning this again for another three years.)

RELATED:
LIST: Here’s What Happens to Your Food When the Government Shuts Down
After House Cuts SNAP Benefits, Tom Colicchio Blasts GOP as ‘Pro-Hunger’
Senate ‘Stunned’ That House Cut Food Stamps Out Of The Farm Bill