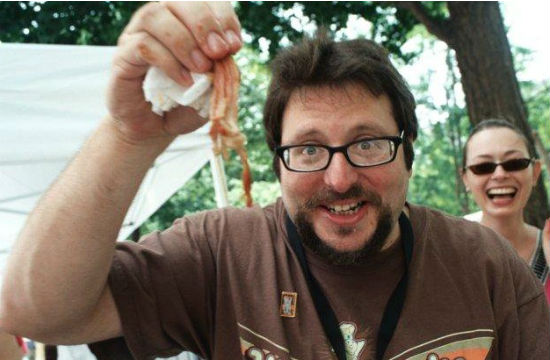 We have mixed and well-documented feelings about Josh Ozersky, and while his Brooklyn takedown piece sounds like the blubberings of a whiny manchild (he’s nearly channeling a gender-swapped Hannah Horvath), the comments on it are a goldmine. We’re also going to refrain from critiquing the piece itself because the current conspiracy theory floating around at The Braiser is that the only reason a married man would move from Stuy-Town to Crown Heights is because he’s having, or saving up for, a baby. (OHMYGOSH ARE YOU HAVING A BABY, JOSH OZERSKY?)

Anyway, here are some of our favorite responses to Josh Ozersky’s “The Painful Exile to Brooklyn,” published on VICE:

“This is out of control snobby and pretentious. Your everything thats wrong with gentrification in Brooklyn. No respect for anybody just your self loathing fat ass. How do you write for vice?”

“YO…ASK ABOUT ME YOU DUMB F***. THIS JAKE G, KING OF KINGS COUNTY. YOU JUST GOT CAUGHT SLIPPIN…ON THE INTERNET. THAT’S ALL I’M AT LIBERTY TO SAY RIGHT NOW. WHAT KINDA JAMAICAN FOOD YOU GETTIN IN THE EAST VILLAGE (OR ANY TYPE OF WEST INDIAN)? YOU REALLY WENT THERE WITH PIZZA?? FROM L&B TO DI FARA YOU’RE A MORON.”

“I think a savvy Brooklynite out there should run over to Kinkos and make 200 flyers with this guy’s face photo, a title at the top saying “I H8 BROOKLYN”, and a few highlights from his article. Go post them on walls and telephone poles all over Crown Heights. I’ll bet his life will get even better!”

“FFS. You sad, butt-hurt whiny , white moron. You wax poetic about all the amazing food in the EV (some of which is leaving due to rent, btw…some, of course, not all) and yet, due to your own lack of resources, you reside in Crown Heights complaining about the lack of foodstuffs in one of the best Eastern Caribbean and Jamaican and Jewish-food laden areas in the entire country. Give me a break.”

“The wasn’t worth the internet it was printed on. Its lame, roll your eyes and never mention this awkward moment again, guys.”