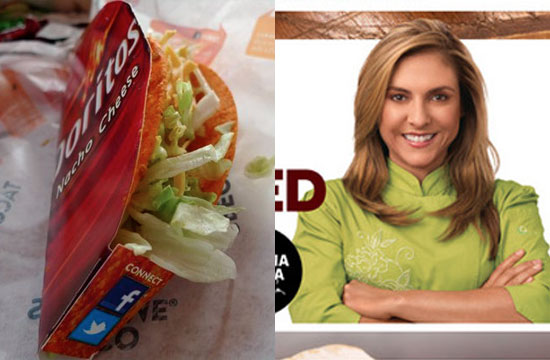 What sort of unholy alliance propelled Taco Bell to the front of the fast food game? How did its growth outpace all of its competitors — even McDonald’s — in 2012? And how did the chain create 15,000 jobs? In an in-depth piece on The Daily Beast, CEO Greg Creed revealed its two secrets to becoming a “better and more relevant” company: its strategic partnership with Frito-Lay, and Lorena Garcia, of all people.

Thanks to the Frito-Lay partnership, the Doritos Locos taco (a taco with a shell made out of Doritos) sold like whoa, if the definition of “whoa” was “about one million tacos a day.” (Thanks to its success, naturally, Taco Bell will soon release a Cool Ranch Doritos Locos taco, with the tagline “Collect All Two.” Very straightforward.) Overall, the chip-taco was meant to be a lure for men to keep going to the restaurant. “The Locos Tacos strategy is meant to cater to the chain’s base, young people (men mostly) who regard cheap fast food as fuel,” notes the Beast. “Better means giving existing power users—young dudes, essentially—more reason to come in.”

But how do you make Taco Bell more “relevant,” when the relevant topics of food discussion revolve around things like “healthy” and “natural” and “unprocessed” and “not Doritos?” How do you get non-dudes (women, health-conscious people, people over 35) into your dude-ly fast food joint?

Coincidentally, did you ever wonder what was going on with that Lorena Garcia Cantina Bowl thing?

The strategy has been to go a little more upscale and try to capture some of the market that Chipotle and other companies have carved out—or what marketers call “going up the value chain.”

…The idea seems to be borrow some of the thunder of Chipotle and Baja Fresh, which have redefined quick Mexican food as healthier and having more vegetables. Thus, Taco Bell’s bowl (carb-free!), has “citrus-herb marinated chicken, flavorful black beans, guacamole made from real Hass avocados, roasted corn & pepper salsa, a creamy cilantro dressing, and freshly prepared pico de gallo, all served on a bed of premium Latin rice.” It costs about $5, compared to $8 or more for a burrito bowl from Chipotle.

So there you have it: Doritos and Lorena Garcia are responsible for Taco Bell’s historic growth, and all from a company that hasn’t moved overseas like its competitors (nearly all Taco Bells are located in the US).

And this is why the free market loves them all.